Joined Sep 4, 2013
·
1,076 Posts
I was going to wait until at least Drive To Survive was relased on Netflix on Feb 28th and was going to avoid commneting/posting about rankings of practice sessions in Barcelona.

Alas, then this came out 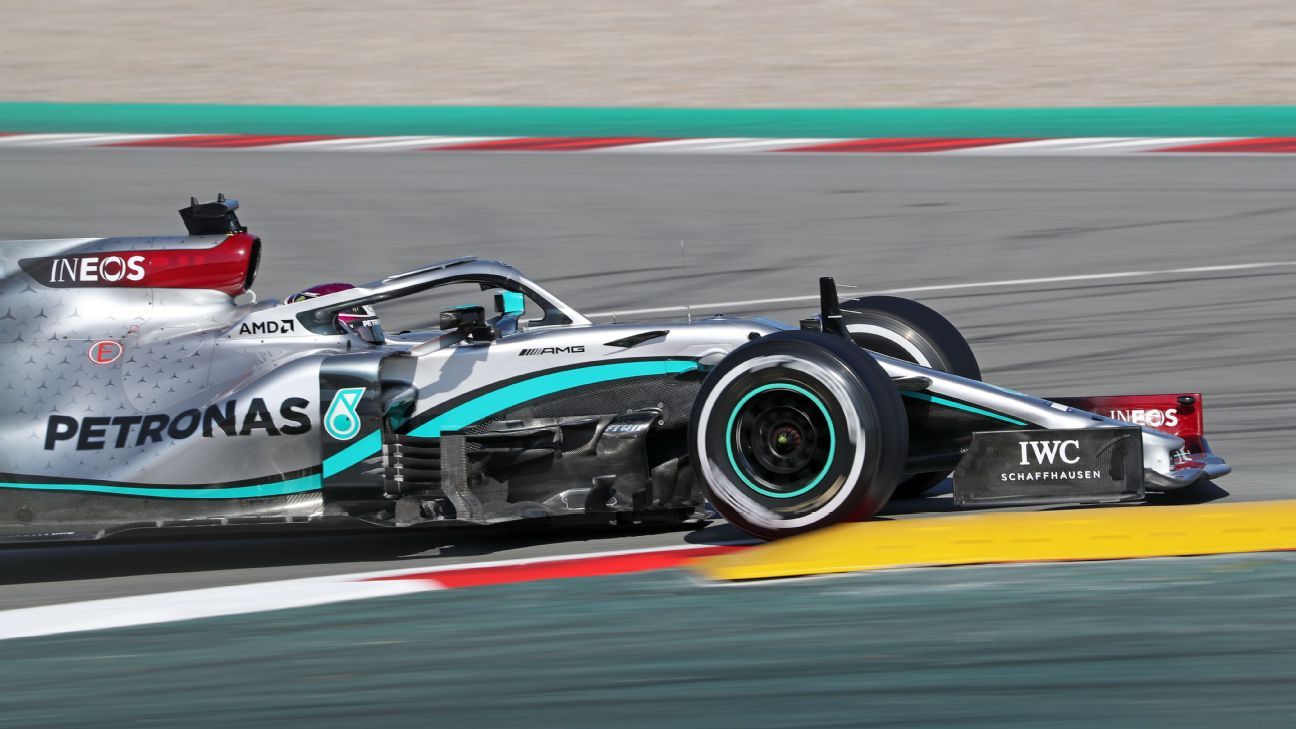 An innovative -- and apparently legal -- Mercedes has grabbed everyone's attention in Formula One's preseason tests. Here's everything you need to know about it.

and it just might have ended the season before it even started.

Now, everybody is downplaying it. Granted. Especially Ferrari. But Mercedes isn't talking about how much advantage they get with it. Considering that

it will be a very hard sell for any team to use already planned resources for development. If the advantage is so clear to actually matter, by Spa the advantage the Mercedes will have will be ridiculous. If it is marginal, nobody will develop it and Mercedes will keep marginal advantage - like they needed any more of that.

Sounds like lose-lose for the fans. Let's hope Red Bull can work out a miracle.

Happy watching to everybody.

Joined Jan 5, 2008
·
1,592 Posts
Thanks so much for that.
The 412 after this video was assume sounding. No electronics, screaming engines, shifting cars, heel & toe downshifts - the whole Magalia.
Started watching F1 just to hear the engines hit hose insane rpm's.
C

Joined Sep 4, 2013
·
1,076 Posts
All right! Seemingly, we have a relatively plausible date for the first race. Appointment is for Sunday, July 5th in Spielberg, Austria.

Allegedly, they are still ironing out travel part and logistics. Plus, all the rules needed to accomodate 1,200 people necessary to run the race without spectators (teams crew, track crews, cops ... and so on). Here's to hope that they will find agreement and officially confirm the date. No motorhomes allowed - that will save couple dozen trucks all in

Next, it also seems relatively plausible that some tracks will have more than one race in order to get to promised 15-18 races in for the 2020 season. I guess those who agree to run races without spectators will be used to run multiple events. I just hope ESPN is not going to mess it up and that it will continue the coverage even if some of these races run in very unconventional format (like, maybe, mid-week race since they are already on the track used for Sunday race).

They already used "absolutely no work allowed" time normally scheduled for August break, so expect circus to run uninterrupted from July to December. It might end up being one of the best seasons in the last 20 or so years. They for sure will have to change how they do things and, who knows, some of those changes might turn up to be really good and will stick for the future.
C

Joined Sep 4, 2013
·
1,076 Posts
Wow! That didn't take long at all. Just read on BBC feed that following driver movements at the end of 2020 season should be confirmed this week

Vettel - Out of Ferrari at the end of the year, destination unknown

Sainz - From McLaren to Ferrari

Ricciardo - From Renault to McLaren

I predicted most of it last year, still sorry to not see Ricciardo in Ferrari. Frankly, of all possible race winners in the championship I see him as perfect fit to be teammate with Leclerc PLUS the best option Ferrari has to win a race if Leclerc is out.

Hamilton would destroy Leclerc's confidence (experience, not raw speed) and Verstappen in Ferrari would be 3 times worse than 2016 Mercedes' season. I have nothing against Sainz, would just have loved to see Daniel get that seat. But hey, who knows, if Mercedes takes their toys and goes home in 2022 ... McLaren just might end up being a way better bet than Ferrari. We shall see.

Below are confirmed 8 races to start the season, further dates TBD.

The idea would see qualifying replaced by a 30 minute race on the second Saturday, with drivers starting in reverse order of their previous finishing position. This non-points scoring sprint race would determine the grid for Sunday.

I personally think it would be a great entertainment. Not so much because races would end up differently - they wouldn't. But that fast guys actually have to work for the pole? Now, THAT would be entertaining to watch. The reasoning is that they are already doing two non-existent Grand Prix (second race in Austria and England), might as well test the concept now that they have a good chance to do so. Needless to say, I agree with Horner.

Here's the confirmed schedule so far

Joined Aug 25, 2015
·
1,956 Posts
Toto doesn't want poor Lewis to be disadvantaged in his quest for seven, so he vetoed the reverse grid idea. I would have liked to see it too; the potential for carnage is mouthwatering.

I have been watching archived races for the past few months - I have watched over 50 races so far. F1 TV is worth it if you are a bit of a fanatic.
C

OttawaSteve said:
I have been watching archived races for the past few months - I have watched over 50 races so far. F1 TV is worth it if you are a bit of a fanatic.
Click to expand...

My track buddy showed it to me, absolutely worth the money they ask. One question to you : do you see it on your TV or you watch on the tablet/laptop/else? If on TV, can you tell me the setup? (installed the app on TV, using HDMI, wireless ... etc). Thanks in advance!

Joined Aug 25, 2015
·
1,956 Posts
I have Apple TV, and they don't have an app for it yet. We use airplay from a phone to the big TV- the Apple TV remote works for pause, FF etc. I currently have the cheap package (about $4/month) but will be upgrading to the pro ($80/year) once the season starts. They tell me that the races will be available not only live, but for download shortly after the race ends. No ads! You also get all three practice sessions, quali and apparently can select driver view from any car if that's your thing. Dirt cheap compared to some of the cable packages I have paid for.

Joined Jan 5, 2008
·
1,592 Posts
I can watch F1 on my cable TV Spectrum last year, Cablevision before that. They carry everything like 7 videos for each race. It seems to change networks a lot. I think it was on ESPN most recently, FoxSports1 prior to that and NBC Sports before that. Once we get closer I'll check the listing and schedule recording if not already set.
Also it's on in many forms on YouTube, highlights, full race, practice, qualifying. pre and post race

Joined Aug 25, 2015
·
1,956 Posts
F1 coverage is highly country dependant. I can watch one practice session, quali and the races on cable and have been for years, but have to suffer through commercial interruptions. They are especially annoying because the Sky feed that TSN buys doesn't have commercials, and they tend to break in at inopportune times. There are races on YouTube but I wouldn't want to rely on YouTube, especially since the races are copyrighted material and F1 is liable to crack down and get them removed.

Joined Jan 5, 2008
·
1,592 Posts
Guess I’m lucky usually only have one commercial break and it doesn’t miss any action
C

OttawaSteve said:
I have Apple TV, and they don't have an app for it yet. We use airplay from a phone to the big TV- the Apple TV remote works for pause, FF etc. I currently have the cheap package (about $4/month) but will be upgrading to the pro ($80/year) once the season starts. They tell me that the races will be available not only live, but for download shortly after the race ends. No ads! You also get all three practice sessions, quali and apparently can select driver view from any car if that's your thing. Dirt cheap compared to some of the cable packages I have paid for.
Click to expand...

Thanks. I took his app for a test drive, well worth it once season starts - I only need to find a solution to watch it reliably on the big screen.

Yeah, I know, HDMI cable and PC will work 100%, but that is actually last solution I would like to deploy.

I am excited because this will be the year to finally cut the cable - all these years I kept it in some shape or form because of F1 racing and DVR.

Frankly, even HBO right now has no content that interests me. Also right now, I think Hulu is better than Amazon or Netflix. Actually, Hulu is right now what Netflix was when I susbscribed to it. Considering low cost of Netflix, I will not cut it, but I tune in more and more rarely.