Joined Apr 14, 2010
·
86 Posts
So, the highlight of my time in Atlanta was definitely the Autocross competition in Marietta hosted by the Peachstate Region PCA. I met up with Eric, my instructor from the Porsche driving school, and his daughter Erica, who was driving his GT3 and also a first timer. Probably because we had the best, most accomplished coach out there, we both won our classes easily. Now, Eric says a win is a win, but being the compulsively honest young lady that I am, I feel the need to clarify that the classes were broken out by gender and I actually heard a woman in my class saying (on the subject of taping her number to her car) "sug, I think a couple pieces of tape is fine . . . I'm not really gonna be drivin' all that fast." So, it didn't really feel like a win because women never go as fast as I do, so the fact that I was going to win my class was kind of a given. I once tried to explain this need for speed that most women lack to a fuming lady roadbiking companion whom I left behind with the wife of a guy I took off with on a group ride one day. Oh, I was in so much trouble . . . my only defenses were "he said his wife had his cell phone number and would call if you guys had any issues" and "but I like to go fast . . ." At any rate, lumped in with the guys, I was right in the middle of all these guys who have been doing this for years, so I think that was a solid first showing.

As for the rest of my time in Atlanta, Saturday I hit the dogwood festival in Piedmont Park, which I'm sure I would have loved if I had a greater appreciation for mobs, screaming babies, tantrum throwing children and deep fried pickles. I will say that I was really impressed with all the great craftsmen, you just don't see such talented craftsmen at fairs/festivals in the northeast, so I collected several cards along the way in case I ever need to furnish a house with beautiful things. Then Saturday night I ventured out to a lesbian bar, but didn't last long. As soon as some awkward woman tried to hit on me after staring at the side of my face for 10 minutes, I took off. That'll teach 'em.

Reminded me of a time when I was out at a bar on Wall St with a woman I was hooking up with at my firm and these two awkward guys just kept staring at us for about an hour even though we were completely ignoring them. They eventually came over (I'm not making this up) with a plate of wings, introduced themselves and asked if we wanted to share their wings. We finally had to acknowledge them, so the girl I was with introduced herself as "Melissa" (not remotely her name) and declined the offer, explaining that she was a vegetarian (which she wasn't). Leave the girls who are not remotely interested in you alone? No, no, that's crazy talk. Instead we got, "well maybe we can just join you while we eat our wings." To which my new vegetarian friend Melissa responded, "actually just the smell of meat makes me really nauseous, like right now I'm getting kind of sick just because you are holding them there." She was good . . . After a painful minute of them standing there nodding in silence trying to come up with their next line, they finally retreated to the bar where they proceeded to stare at us until we left. Well played, Melissa, well played.

Headed to Montgomery, AL later today (and for those of you who have thoughtfully pointed out that my itinerary makes no sense, it's because I had to beeline straight to Birmingham to be there in time for the Porsche driving school), then onto Jackson and Biloxi, where a friend from New Orleans has assured me that I can get a pint size glass of bourbon brought right out to my car window by a beautiful woman for $2.50. If I never leave Biloxi, it's because my friend was telling the truth.

For those of you who asked about my favorite part of the drive so far, that would have to be Rt. 13, the Coastal Highway between Ocean City and Norfolk, those bridges over the Chesapeake Bay are breathtaking, even better than the drive to Key West in my opinion. 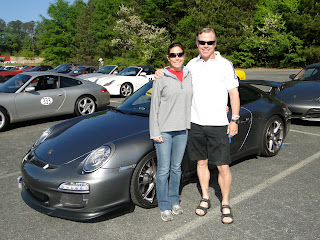 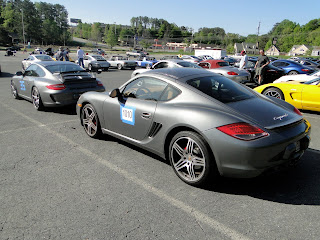 Out of the sea of Porsches, Eric's GT3 was definitely the sexiest car there, though the Ford GT I tweeted a picture of was a close second for sexiest car in the lot.​