Joined Apr 14, 2010
·
86 Posts
About to hit the road bound for Chicago because one of my favorite guys in the world (Adam Levy, the guitarist I mentioned when I was in New Orleans, played with Tracy Chapman, Norah Jones, etc.) is in a new band with Charley Drayton (the drummer I met in NOLA who played drums for Simon & Garfunkel at the Jazz Fest) and they are opening for the Dixie Chicks and the Eagles Saturday night in Chicago. Adam and I became pretty tight friends one summer way back before law school at the National Guitar Workshop and then we fell out of touch my first year of law school because it sort of became my entire life to the exclusion of all other things, including way too many friends. I got back in touch with him just about the time I hit the road and we promised to get together and catch up at some point this summer. Sure enough, I got a tweet from him a few days back saying he was going to be in Chicago, so that's where I'm headed.

Speaking of life and people coming full circle, I spent last night hanging out with a fellow lesbonic blogger (her blog is called the Gypsy Chronicles) who emailed me just after I left NOLA asking if I wanted to meet up for a drink in NOLA. Apparently, she came across my blog one day while she was procrastinating at work and had been following it ever since. She explained that she was taking off on her own roadtrip around the country in the opposite direction and we have kept in touch ever since, hoping to meet up somewhere along the way. So, when she emailed to say that she was headed toward Madison I decided to stay another night so we could rendezvous here. I'm very glad I did because not only is she an incredibly interesting person (and an emmy award-winning sound editor who has worked on an endless list of big hit movies and TV shows), she is also a whiskey drinker and a fabulous wingman--best random company I've had this whole trip. We checked out the "Queer Shorts" (an evening of back-to-back short plays that happens annually here in Madison) because some girls I met the night before said that was the thing to do and then did a whirlwind tour of pretty much every gay bar in Madison until I found the real life version of the leggy Wisconsin blond I was picturing in my head.

I have to say that I really outdid myself trying to "keep it real" in Wisconsin, from the beer and cheese soup to the deep fried cheese curds, brandy old fashioneds, brandy slushes and Yahara whiskey (smooooth...and by smooooth, I mean ROUGH). Getting a little nauseous just remembering it all...but the classic WI leggy blond from lastnight is the only stop on my little flavors of Wisconsin tour that I don't regret. All the hottness of the hottest east and west coast girls, but so much warmer and sweeter...perfect Wisconsin girl, perfect Wisconsin night. 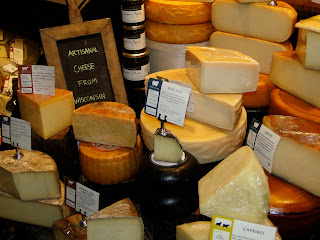 Fromagination, the most famous cheese shop in Madison and the best cheese shop I've ever found outside of France, Italy and NYC. I wandered in here after downing a plate of deep fried cheese curds and couldn't help but think how much less nauseous I would be if I had just eaten a pound of cheese...lesson learned. 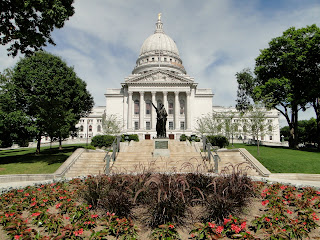 The Capital is absolutely stunning, particularly when it is all lit up at night (tweeted a pic of it at night because I didn't have my real camera on me). Factoids: biggest rotunda of any state capital in the US (all granite, making it the only granite dome in the US and the biggest granite dome in the world) and that woman on top is pointing toward DC (good to have that point of reference to orient you as you stumble from bar to bar, particularly if you are supposed to end up in DC)