Joined Apr 14, 2010
·
86 Posts
Just woke up in Deadwood, SD having covered a lot of ground the last few days. I spent Thursday driving from Glacier to Missoula, following a gorgeous scenic route that this woman I met the night before (when I pulled over for a drink at the Two Sisters Cafe just outside St. Mary) wrote out for me carefully noting all the reservation roads where the cops aren't allowed to patrol and don't have the authority to issue speeding tickets. Fabulous.

Friday I woke up early and drove to the North entrance to Yellowstone, all the way through the park, out the South entrance and halfway through Grand Teton Nat'l Park. When I finally checked into a lodge and hit the bar around 10, I immediately made friends with this awesome bartender (let's call him D) who tried to prove his love by setting me up with the only lesbian he knew of in the park. As soon as he got cut for the night (after begging a little) he disappeared for about an hour before re-emerging and sliding onto the stool next to me a little sheepishly, explaining that he had just had one of the most awkward moments of his life. Turns out he had gone over to where this supposed ***** was working that night, dragged her away from the customers she was serving and proceeded to gush to her in front of all her co-workers and some customers that he had found the woman of her dreams, hottest, coolest lesbian ever, he wants to marry me, but I'm only into girls, etc. Whereupon, after a long awkward pause, she says, "um, I'm actually straight." His reply: "oh, yeah, okay, cool, yeah, okay, nevermind (that we all thought you were a lesbian and have for years)."

A couple whiskies and "duck farts" (fyi crown and baileys) later, the phone at the bar rings and the bartender hands it to D who I hear saying, "yup, she's sitting right next to me." When he puts down the phone, he recounts the following conversation to me:
Non-*****: "Is that hot lesbian still at the bar?"
D: "yup, she's sitting right next to me."
Non-***** to her lesbonic roommate: "Get dressed! Get! Dressed!"
Apparently, they don't get many single ****** rolling through this park. Shortly after these two girls appeared at the bar 10mins later, we moved the party back to the parkie dorms (where all the people who work in the park live) at D's insistence because, according to D, it's against the law for non-park employees to be on the premises. He was so excited that we were doing something illegal that I could blog about, I didn't have the heart to break it to him that sneaking into the parkie dorm was by far the most soft-core illegality I have engaged in this entire trip...

When I woke up, a little hungover and very sleep-deprived, yesterday morning, I set off on a scenic drive that a guy at the bar suggested the night before (southeast to Riverton, through Boysen State Park to Thermopolis, then up through Bighorn Nat'l Forest to Buffalo) and then picked up 90 in Buffalo and took it across Wyoming, hoping to end up somewhere near Mt. Rushmore for the night. I ended up in Deadwood (this little town filled with cowboys and bikers just drinking and gambling 24-7) after getting a little lost in the Black Hills around 10pm (because my power outlet in my car died so Mrs. Garmin was offering no guidance whatsoever) and thinking I should just find somewhere to sleep. My plan was to catch up on sleep and give my liver a night off, but then I ended up grabbing a late dinner at the bar nextdoor, where I met these awesome guys from Bismark, ND and somehow ended up getting incorporated into their bar hopping bachelor party, including a stop at Saloon #10 where Wild Bill Hickok was shot in the back of the head holding his pairs of aces and eights (hence "Dead Man's hand").

P.S. For those of you who have emailed me asking for bigger pictures, you just click on the pic and it blows up to full size...like magic. 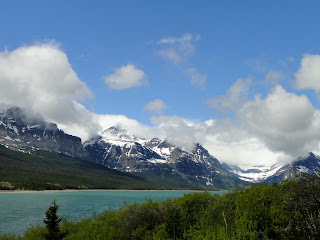 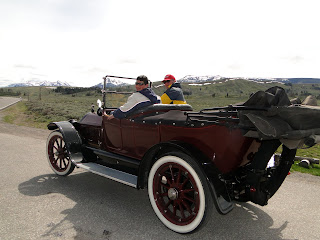 Bob and Paul touring Yellowstone in their 1914 Cadillac 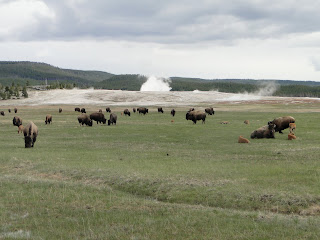 Bison and Geyser Fields in Yellowstone 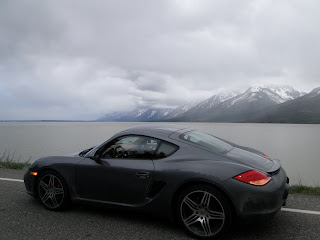 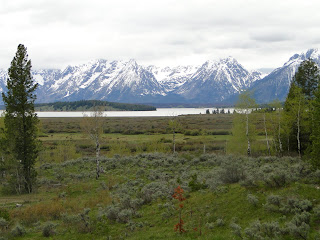 The Tetons in the morning 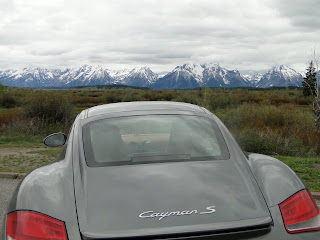 A nice chunk of the Teton Range 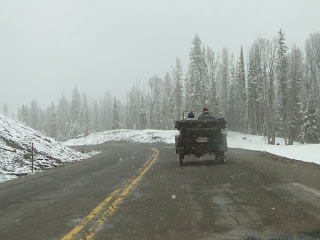 I bet these kids wish they had sprung for some heated seats now... 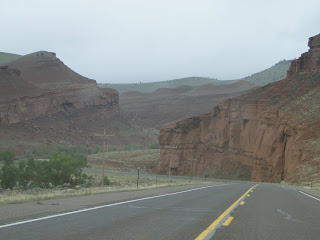 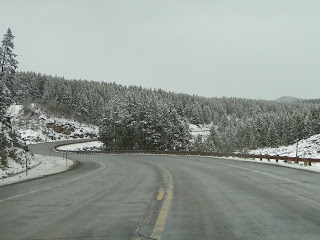 Joined Jun 10, 2008
·
465 Posts
There are at least two cigarette lighter outlets in the Cayman, the main one next to the ashtray and one more in the passenger footwell on the left. Check your fuses, you may have blown one. Hopefully, you can get Mr./Ms. GPS working again!

Thanks for the tips! Found the one in the passenger footwell (outta sight, outta mind...). Suffice to say, Mrs. Garmin is back in my life and I feel like I have my best friend back ;-) (I know I need to get home soon...)