Joined Apr 14, 2010
·
86 Posts
​
Ah, Birmingham. I hardly knew yee . . . but my god, I had a good time. As promised, as soon as I finished my post Wednesday night, I headed out to find Hot and Hot. As I was walking in, I was pretty sure I saw Chris Hastings (recently nominated for the Best Chef in the South Award by the James Beard Foundation) standing out in the parking lot, so I went over and introduced myself and explained who had sent me. The next thing I knew I was seated at the chef's counter watching six to eight more junior chefs running around in a perfectly orchestrated frenzy and Chris was standing next to me asking me what I was looking for out of this meal so he could prepare a special tasting menu for me. I will recap the end result briefly for the foodies: (1) lobster bisque with asparagus flan (w/ Henriot Brut Champagne); (2) local wild watercress salad with trumpet mushrooms, Louisiana crawfish, Benton's country ham and a lemon vinaigrette (w/ '08 Les Boucauds Sancerre); (3) seared flounder with spring vegetable quinoa, garden frisee and a blood orange vinaigrette (w/ '08 Honig Sauvignon Blanc); (4) braised mississippi rabbit with spring vegetable ragout, homemade gnocchi and rich jus (w/ '07 Adelsheim Pinot Noir); (5) pork trio (w/ the pork coming from Fudge Farms in Madison, AL)-loin with pea salad, leg with sweet potatoes and belly with collard greens and balsamic glaze (w/ '06 Valle Perdido Reserve Malbec); (6) local cheeses (w/ '08 Saint Cosme Cotes du Rhone); (7) panna cotta with fresh berries (w/ Donnafugata Passito Di Pantelleria-forget the year, but a fabulous dessert wine from a volcanic island off the coast of Sicily). Added bonus-I was still able to get up and walk out of the restaurant when it was all over, shocking, but true.

Over the course of my meal, I kept noticing people checking me out and the guy sitting next to me sneaking a peek whenever the chefs referred to "the VIP." Finally, he leaned over and said, "I just have to know, are you some big food writer?" "No," I explained, "I just had a night of drunken debauchery with some of Chris's old friends in Charleston last night and here I am." "Huh," he said, "must have been quite a night." And how. I have to say this was a phenomenal evening and after talking to Chris about everything from how important he believes it is to keep things local, to the hand-thrown pottery (made in Leeds, AL that he helps design with the potter), to how many celebrity chefs have made it all about their egos instead of the food, I cannot say enough about Chris, his vision and his restaurant. If you are ever within 200 miles of Birmingham, you should not miss the opportunity to eat here.

As for the driving school, it's just something you have to experience, so I won't even try to write about everything I learned, though my tweets will give you a good idea of the paces they put you through and the incredibly thorough training you get here. A few helpful tips I will pass on: (1) a little braking, even just touching the brake pedal (or jumping off the throttle), will help you execute a turn better because it transfers weight to the front of the car and the front wheels that do the turning, (2) (for the kids who drive stick) don't pull your parking brake when you park if your brakes are really hot, just put it in gear instead so you don't warp the drum, and (3) "when in doubt, brake like hell" (i.e. when everything we learned about regaining control in an understeer or oversteer situation doesn't work and you realize that there is no way you can save yourself, slam on the brakes as fast and as hard as you possibly can).

Arrived in Atlanta last night, off to check out the dogwood festival this afternoon, then joining one of my instructors from the school at an autocross event (my first) outside Atlanta tomorrow. Will let you know how it turns out. My goal is to finish without wrecking my car or killing any spectators. 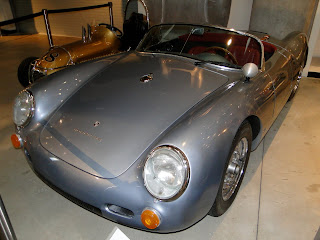 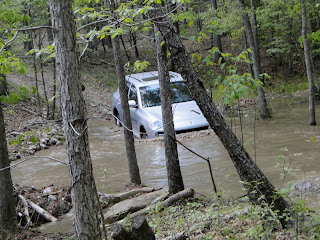 Off-roading in a Cayenne S, then hit the track (which was highly technical with all kinds of tricky corners and curves) in a Cayenne turbo and did the same time we were doing in Carrera Ss. As one instructor put it, these cars are "ridiculously over-engineered for what most people do with them." 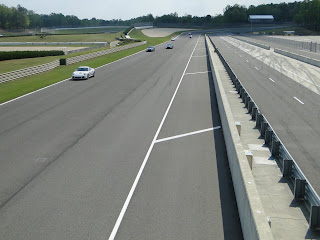 A pack of Carrera Ss trying to chase down the instructor out front in the Turbo. Good times. 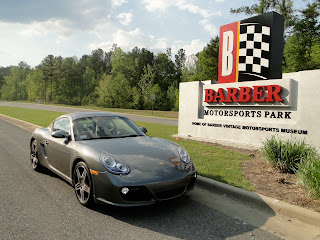 Onto Atlanta . . . thinking how painfully slow 90 felt all the way.​

Joined Aug 22, 2005
·
34,646 Posts
More good stuff and it sounds like you'll have plenty of left-overs to keep with you on the trip. Do you have your whole route planned (and if so can you share ahead of time?) or if not, how are you deciding your route?
K

So, I just shared the next week of my itinerary in my last comment on the Beginning thread and am totally open to suggestions. I do have an itinerary just because I always like to have a plan, but it is definitely flexible. For example, one of the guys I met in Charleston told me El Paso (where I was planning to stay for a night b/n Austin and Albuquerque) was "a dump" and the I had to go to Marfa to see the Marfa lights and stay at some amazing hotel there and that I had to go to Big Ben because it is the biggest and emptiest National Park. By the time I finished my third beer and second shot, I was a believer. So, I'm leaving Austin a day earlier then planned to free up a couple days for Marfa and Big Ben.

The big picture is just steadily working my way in a big loop around the country-through all the parks in Utah, then to Las Vegas, San Diego, LA, up the West Coast (hitting yosemite and napa) to Seattle, then over to Glacier Nat'l Park, down to Yellowstone, and somehow home across the north . . .

Ketch Me said:
The big picture is just steadily working my way in a big loop around the country-through all the parks in Utah, then to Las Vegas, San Diego, LA, up the West Coast (hitting yosemite and napa) to Seattle, then over to Glacier Nat'l Park, down to Yellowstone, and somehow home across the north . . .
Click to expand...

When will you be in the LA area?

There are two Porsche Owners Club racing events approaching. The first is May 1st & 2nd at Willow Springs (just north of LA) and the second is the first weekend in June at California Speedway in Fontana (just east of LA).

We can get you on track both times if you like. Send me a PM for details.