Joined Apr 14, 2010
·
86 Posts
I arrived in Monterey around 11pm last night after 11 hours on the road (the last two and a half winding along the PCH in the dark with dense fog and rain, dodging most but hitting a couple of the big rocks strewn across my lane--not fun at all, but that's what I get for leaving the agenda up to some wildly hungover, sleep deprived girl). I need to go check out Monterey before I head for Yosemite, but have to quickly share this highly edited version of the story of my last night in LA (the unedited version will no doubt be in my book).

I was at a certain establishment, spending some quality time with the only hot girl who was working at this establishment, and her boss kept coming by and pestering us and making weird little snide remarks, prompting me to ask her if this guy was always such a jackass and her to explain that no, he was just doing it because I was gay and never bothers her when she hangs out with straight customers. When he reappeared a moment later and fired off one more comment, I was done. I followed him out to the main room and proceeded to dress him down to nothing in front of about 20-30 onlookers to the point that when I was done and asked him he had anything else he wanted to say to me, he just shook his head like a scared little kid. I think the nicest thing I said to him was something like (after a quick recap of my credentials), "if you think I'm going to let some short, fat, illiterate, homophobic illegal immigrant harass me because I'm gay...you are out of your f*ing mind."


Now, the girls who work at this place hate this guy because he harasses them all the time. So, when I returned to the hot girl whose eyes were just wide with amazement, she grabbed me and hugged me and when she was done laughing hysterically, but still hugging me so hard it was hard to breath she said, "I can't believe you just did that. You are amazing. Oh my god, I f*ing love you. You have more balls than anyone I have ever met. I can't believe you just went out there in your f*ing bare feet (I lose flip flops easily) and said [maybe I'll tell you exactly what I said in my book] to him. I would die for you, girl. You are the most amazing person I've ever met. I would f*ing die for you." To which I replied, "yeah, that was pretty awesome...even though I'm going to be kicked out in about 20 seconds. totally worth it." We sat back down and waited for the bouncers to come for me while she repeated her favorite lines over and over, until we were laughing so hard we were crying. After about 10 minutes of reliving the smackdown, the bouncers still hadn't come for me and she said, "I can't believe it. I've never seen this before. He's so scared of you, he's too scared to try to throw you out. Oh my god, this is amazing. Unf*ing believable. I have never seen him scared of someone before. You are so fierce and brilliant and amazing, I would f*ing die for you."


When we realized that I wasn't going to get kicked out because this guy was too scared to tangle with me again, I said I might leave anyway because I just wasn't going to have any fun there at that point. To which this girl replied, "if you go, I'm going with you." Knowing they were short staffed to begin with and that she was the only hot girl working that night, and that basically that place was screwed for the night if she left, I asked "aren't you on until close? If you leave with me now won't they fire you?" To which she replied, "I don't care, I seriously would f*ing die for you. I just want to be able to hang out with you for one night before you go. I'll meet you by the door in 5 minutes." Which she did and then grabbed me and spun me in the direction of the bartender and shouted to her, "do you see this girl? I'm leaving with her because I would f*ing die for her." She proceeded to deliver the same message to her boss, the bouncers, the cab driver (to whom she told the entire story complete with direct quotes) and a few innocent bystanders just walking past on the street.


Somewhere around the fifteenth time she pledged her willingness to die for me, a cautionary flag went up in my wasted little head because her level of enthusiasm reminded me of a crazy slovakian model I met the last time I was in LA. The sort version: (Day 1) Danced all night, made out for a few seconds on the dance floor, wouldn't let her come home with me despite (or because of?) her begging, but did exchange numbers with her so we could grab dinner the next night; (Day 2) woke up to 7 missed calls and 27 text messages from her and sent her a nice brush off text telling her some work had come up that I had to deal with asap and that I wouldn't be able to see her before I left town; (Day 3) she showed up at the chateau in the middle of the night demanding to be let into my room and, when they wouldn't give her a key after calling my room several times and getting no response, camped outside my door for hours leaving me several text messages and voicemails begging me to let her in so she could "say goodbye" because she knew I was leaving the next day (must have stalked me online for hours to come up with my last name because she only knew my first name and the city I was living in at the time).


At any rate, after a quick drunk analysis of the mental health of the very hot girl who would f*ing die for me, I decided she was more passionate and wasted and full of big romantic notions than genuinely insane and I let her come back to my hotel with me for a fabulous (though sleepless) night. Everytime I picture her jackass boss's face when he realized she was walking out with me, and that they were screwed for the night, still puts a big smile on my face. Not sure I would die for her, but that girl was solid. I'm all about loyalty and fighting the good fight. So, when she asked when she would see me again in the morning and I said I would call her the next time I was in LA, I meant it. 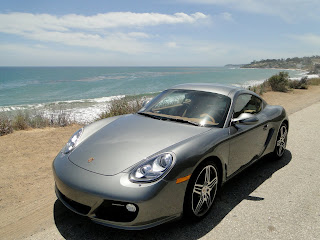 The PCH between LA and Santa Barbara 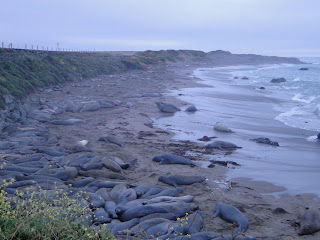 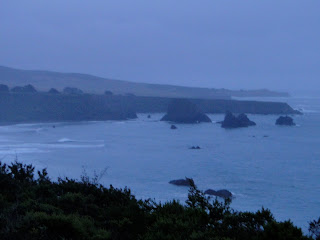 Night and fog closing in around me on the PCH...the driving rain and resulting rock slides would come later when it was pitch black out just to really test my skills...​