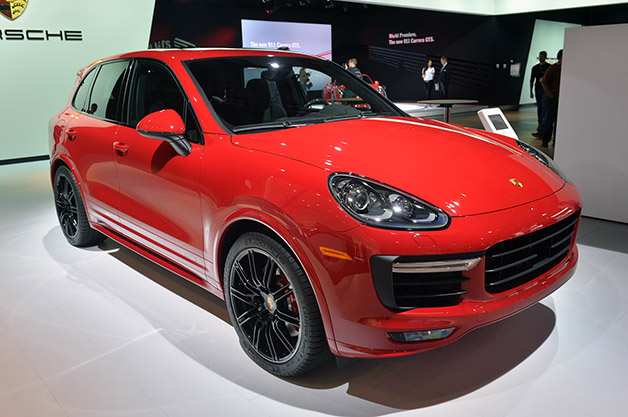 The Turbo may be the most powerful model in the Cayenne range, but the GTS is arguably the enthusiast's choice. (In so far as a 4,500-pound crossover can be considered an "enthusiast's choice," anyway.) And now, after refreshing the rest of the Cayenne lineup, Porsche has revealed the new Cayenne GTS, alongside its new 911 GTS stablemate, here at the LA Auto Show.

Like the new Cayenne S, the new GTS drops the previous version's atmospheric V8 for a 3.6-liter twin-turbo V6, but ups the output to 440 horsepower and 445 pound-feet of torque to propel Zuffenhausen's portliest to 62 in a scant 5.2 seconds. Alongside the power upgrade, the GTS gets a lowered air suspension and sportier exhaust, the beefier brakes from the Cayenne Turbo and an upgraded aero kit to help with the whole barn-door-profile thing.

Just don't expect all that extra kit and the prestige of a Porsche badge on your crossover to come cheap, with prices starting at $95,500 (plus $995 destination).2015 Porsche Cayenne GTS proves performance is relative originally appeared on Autoblog on Thu, 20 Nov 2014 14:41:00 EST. Please see our terms for use of feeds.
[h=6][/h]Permalink | Email this | Comments