Joined Apr 14, 2010
·
86 Posts
I just got back from visiting Mr. Charleston at his place in Bar Harbor, ME and while I'm short on entertaining stories at the moment because I've spent whatever time I didn't spend book writing, job hunting and dealing with my sister's wedding this month squeezing in as much quality time as possible with friends before I go back to work, I do have some new pictures for those of you who have been asking for pics for months now. If you are a self-described or closet "leaf peeper" you will no doubt find them particularly satisfying.

Incidentally, I have to say that I owe those swedish girls from Seattle a debt of gratitude because thanks to them I had the best moves on the dance floor for 3hrs straight at my sister's wedding and I got to bust said moves out on Ingrid Lucia, my favorite musical find of my whole trip, who flew in from New Orleans for the occasion--totally worth every minute of being chased through the streets of Seattle by a deranged woman in the wee hours of the morning. 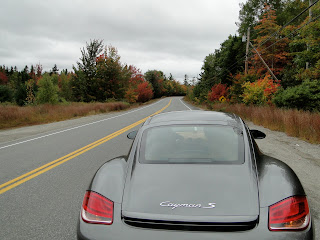 I left home on a hot, sunny indian summer morning and arrived in Bar Harbor on a cold, crisp fall evening, complete with changing leaves, just a matter of hours later (really wishing that I'd packed one article of fall-appropriate clothing). 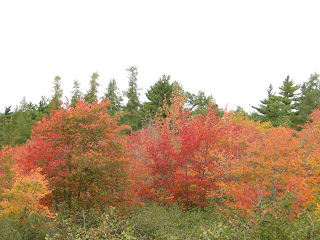 While I hadn't even realized that the leaves would be changing yet when I headed off to Maine, I have to say the little pockets of color that were starting to pop up in the midst of all the green, were pretty breathtaking. Still, when our waitress one night referred to us in passing as "leaf peepers," I immediately corrected her (if you had seen the "leaf peepers" being herded on and off buses all day, you would understand the need I felt to distinguish myself from them), informing her that I had just come up to visit my friend and had no idea that the leaves were already changing (carefully citing my relative youth and my obvious lack of fall-appropriate clothing as evidence that I was not a "leaf peeper"). From the look she gave me when I was done, I'd say I sort of won the battle, lost the war. While I was pretty sure that I had succeeded in convincing her that I was not a "leaf peeper," I was also pretty sure that she thought I could only hope to be as well-adjusted as any one of the self-described "leaf peepers" in the room. 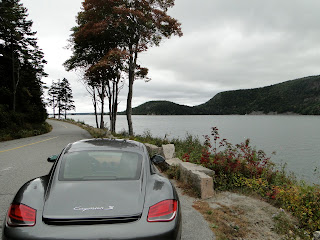 Driving along Somes Sound--the only fjord (a long, deep and narrow valley carved out by glaciers and flooded by the sea) on the east coast of the US. If you look closely, you can see a couple of the many lobster pot buoys out in the sound. 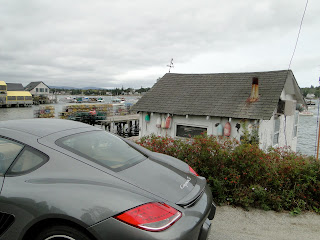 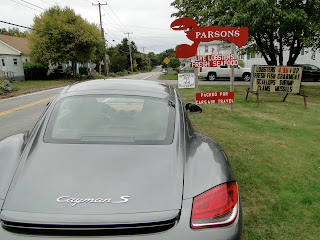 I told Mr. Charleston that I couldn't leave Maine without my Maine money shot, prompting him to ask what exactly I had in mind and me to answer while studying him like he was a little slow, "um, my car in front of a giant lobster..." Unless my blog was suddenly going triple x, I was hard-pressed to fathom what else a Maine money shot might consist of. We finally found this lobster (best we could do) after a day and a half of scouring the area, but I had to drive up on the front lawn of this place and the raised sidewalk to get this close. Mr. Charleston tried to dissuade me from doing this, but after I explained to him what I had learned in Marfa (that it's hard to get in trouble for things you do so fast that people don't even realize what is happening until it's over) and assured him that I could get up there, get my money shot and be gone in under 45 seconds, he gave me his blessing...before turning on his heel and hustling down the street to find a bush he could hide behind while pretending not to know me. 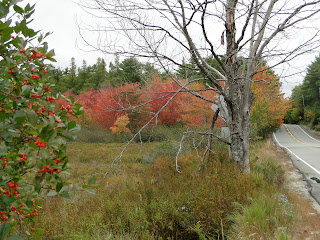 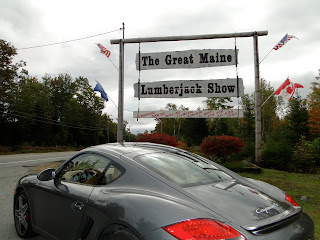 I missed the show... haven't been this disappointed since E and I pulled into Beaufort, NC to find that we had just missed both the weekly cannon firing and monthly civil war re-enactment.​