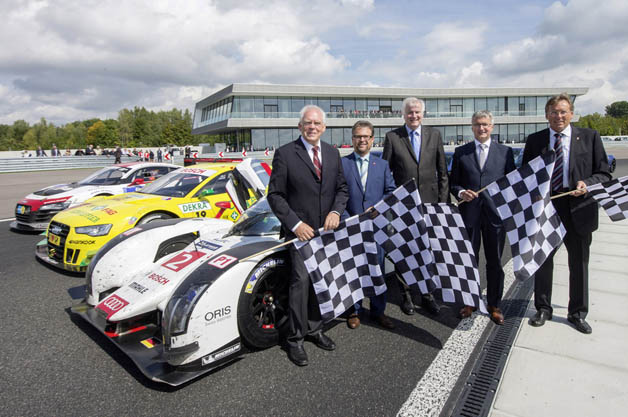 If you've been scratching your head wondering how - between Audi and Porsche - the Volkswagen Group could possibly support two rival top-tier LMP1 programs at Le Mans and the FIA World Endurance Championship, but stay out of Formula One entirely, you're not alone. In fact, Porsche was said to have been eying an F1 entry if Audi had internally blocked aspirations to return to Le Mans. But according to the latest rumors, it's Audi that's now preparing to shift away from endurance racing and onto the grand prix circuit.

Word has it that, following internal pressures from within the VW Group, Audi is finally gearing up for a full assault on F1. It's said to be developing a new six-cylinder turbo hybrid power unit - potentially at its new racing headquarters in Neuburg - and, in an expanded partnership with Red Bull, either take Renault's and Infiniti's places with the Red Bull Racing team or take over the Toro Rosso team entirely.

Although Ingolstadt has not campaigned in grand prix racing since the pre-war days of the Silver Arrows, it was said to have been the impetus for the FIA's push a couple of years ago for new four-cylinder engine regulations until Audi bailed on the idea altogether and F1 went for six-cylinder engines instead.

The rumors are ostensibly fortified by Audi's recent hiring of Stefano Domenicali. The former Ferrari team principal has no experience in endurance racing and reportedly doesn't even speak German, but while he was nominally hired in a non-motorsport capacity, the F1 shift would certainly make sense of his recruitment. Rumors have even speculated that the big question mark hovering over Fernando Alonso's future could be answered as part of Audi's arrival in the sport.

Audi's move to F1 would not come without its costs, though, and that would not only spell the end of its nearly unbroken thirteen-year winning streak at Le Mans stretching back to the turn of the millennium, but also potentially the end of its DTM touring car program. Its customer GT racing program, however, would remain unaffected, according to reports. Meanwhile, along with Honda's imminent arrival on the grid and perennial participants Ferrari, Mercedes and Renault, Audi's move would bring the number of engine manufacturers participating in F1 from a low of three this season up to five - just short of the six that competed years ago before BMW, Toyota and Honda withdrew.Audi rumored to ditch Le Mans, DTM for F1 originally appeared on Autoblog on Sun, 26 Oct 2014 15:27:00 EST. Please see our terms for use of feeds.
[h=6][/h]Permalink | Email this | Comments