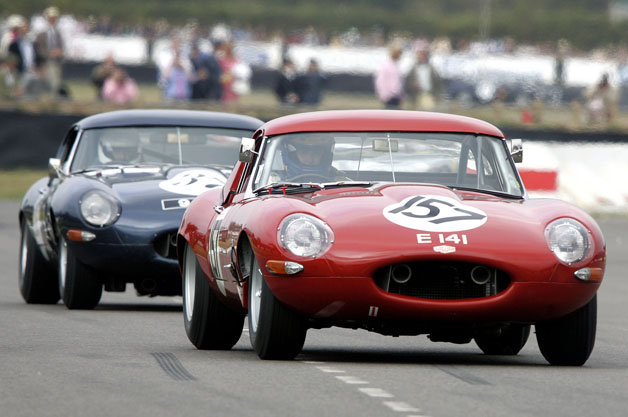 One-make racing series have become all the rage for customers who want to actually race their exotic sports cars (or competition-spec versions of them, anyway). Ferrari, Maserati, Lamborghini and Aston Martin all offer such programs, and Porsche supports several. Now Jaguar is getting in on the action as well, but instead of turning one of its production models - we're looking at you, F-Type - into a spec racer, it's launching an historic racing series instead.

The 2015 Jaguar Heritage Challenge will be open to cars made by the Leaping Cat marque before 1966, including the C-Type, D-Type, E-Type and Mk I and MkII sedans. The series, which builds on the success of the previous Jaguar E-Type Challenge, will be administered by the Historic Sports Car Club (HSCC) based at Silverstone and will include four races in the UK and one in Europe, with the exact schedule still to be determined.

The program was announced at the launch of the Jaguar Heritage Driving Experience, where Jaguar Land Rover Special Operations director John Edwards was also named chairman of the Jaguar Daimler Heritage Trust, replacing former Jaguar managing director Mike O'Driscoll who chaired the organization for the past five years.

If you'd like to know more about the heritage series, scroll down below for the details straight from the Leaper's mouth.Continue reading Jaguar launches new classic racing series
Jaguar launches new classic racing series originally appeared on Autoblog on Fri, 14 Nov 2014 07:59:00 EST. Please see our terms for use of feeds.
[h=6][/h]Permalink | Email this | Comments