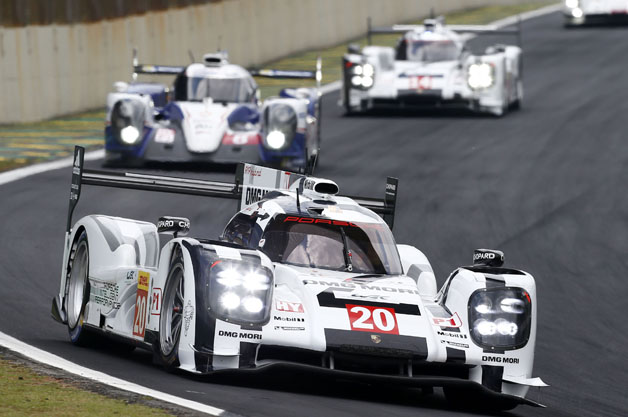 It was a mixed bag for the Porsche team at the 6 Hours of Sao Paulo this weekend - the last race of its first season in the FIA World Endurance Championship. On the one hand, the German team took its first win since launching its LMP1 effort at the start of this season. On the other, its star driver suffered a massive crash that left him in the hospital.

The crash occurred with less than half an hour to go when Mark Webber, who was running sixth in the #20 Porsche 919 Hybrid, lost control at Turn 14 at the Interlagos circuit - the same spot where he crashed his Jaguar F1 car during the 2003 Brazilian Grand Prix - and crashed tail-first into the barrier. Both Webber and Matteo Cressoni (driver of the #90 Ferrari 458 Italia with which Webber collided) were evacuated to the trackside medical center and were then taken to the nearby Hospital Bandeirantes. Both were reportedly conscious throughout but are undergoing further testing, described as being in "satisfactory" condition by the FIA medical official on the scene.

The occurrence of the crash so close to the end of the race, and the time it took to clear the wreckage, meant there was not enough time for a restart, so the race was completed under the safety car. But when the field did cross the finish line, it was the #14 Porsche 919 Hybrid driven by Romain Dumas, Neel Jani and Mark Lieb that took the checkered flag - marking the first time that Porsche has won an endurance prototype race since 1989.

Of course, that solitary victory was not enough for Porsche to take the title, which went to the Toyota TS 040 driven by former F1 drivers Sebastien Buemi and Anthony Davidson, who finished the race in second place ahead of the Audi R18 E-Tron Quattro driven by the retiring Tom Kristensen and his co-pilots Lucas di Grassi and Loic Duval.

Top honors for the season in LMP2 went to Sergey Zlobin for SMP Racing in the Oreca-Nissan, while Ferrari took the GT title.