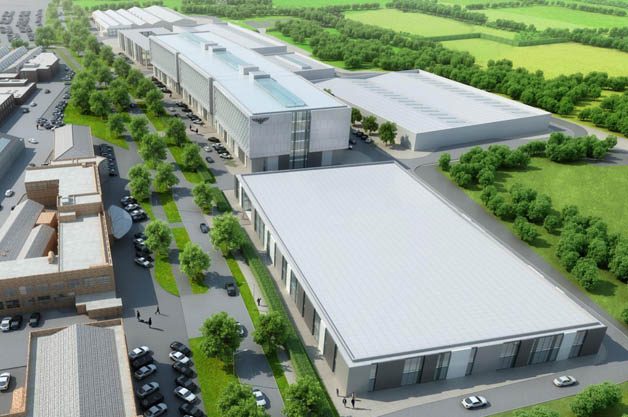 The world's fastest lorries. That's how Ettore Bugatti referred to cars from Bentley back in the day, employing the British term for trucks, long before the two became sister companies. Those immortal words will come true when Bentley launches its new SUV, which promises not only to be the most luxurious and prestigious but also the first to crack the 200-mile-per-hour mark. But it won't come without its share of investment.

Bentley and its parent company Volkswagen will surely have invested untold millions to bring the luxury crossover to market, but the vehicle itself isn't the only major investment the British automaker and its German owners will have made when it does. Bentley is also embarking upon an unprecedented expansion of its headquarters in Crewe.

The massive expansion plan, budgeted at over $60 million, will create over 300 new jobs and include the creation of a new research and development center on site. The facility will cover a good half-million square feet and include a design studio, R&D offices and technical workshops that will be home to some 1,300 engineers and will be "the latest step in preparing Bentley's infrastructure to bring the world's first ultra-luxury SUV to roads in 2016." Bentley may undertake some of the SUV's production at home in Crewe, but much of the work is expected to be completed alongside the next Volkswagen Touareg, Audi Q7 and Porsche Cayenne in Slovakia.

The expansion plan was announced by Bentley chief Wolfgang Dürheimer (also CEO of Bugatti) while George Osborne, Chancellor of the Exchequer (Britain's equivalent to the Secretary of the Treasury or most any other government's Minister of Finance) was visiting Crewe. "Bentley is an iconic British Brand that exports around the world. Their decision to create another 300 jobs in R&D on a new site providing close to 1,000 new jobs is fantastic news for Crewe and for Britain," said Osborne. "The investment will not only create jobs at Bentley, but support many more through suppliers across the UK."Continue reading Bentley opening new R&D center in Crewe
Bentley opening new R&D center in Crewe originally appeared on Autoblog on Tue, 09 Dec 2014 08:47:00 EST. Please see our terms for use of feeds.
[h=6][/h]Permalink | Email this | Comments