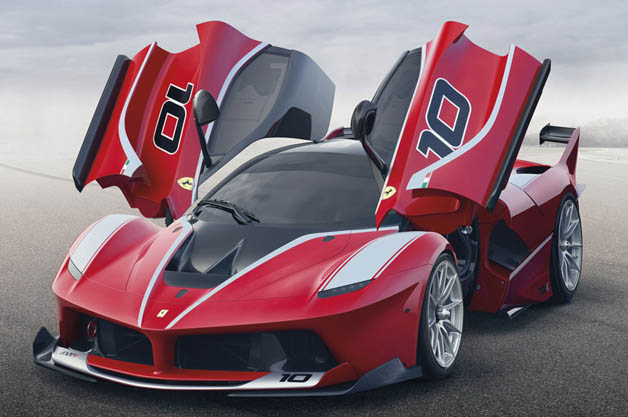 Ever since Ferrari revealed the latest evolution of its flagship hypercar series with the debut of LaFerrari at the Geneva Motor Show last year, the question on everyone's mind - aside from how it would stack up against rivals like the McLaren P1 and Porsche 918 Spyder - is what it would look like in its ultimate, unhinged, track-focused iteration. But now we need wonder now more as the Prancing Horse marque has revealed the new FXX K.

The what-letters-now, you ask? FXX K. The name is drawn from the Enzo-based FXX that kicked off the company's client development program the better part of a decade ago, but with an extra letter tacked on to signify the KERS hybrid system on board. In the FXX K, that system has been further optimized: the electric motor now delivers 187 horsepower (instead of 160) and the 6.3-liter V12 has been boosted to 848 hp (up from 789) for a total output of 1,035 prancing ponies - a solid increase from the 950 hp in the road-going LaFerrari, but at 664 pound-feet, it's down in the torque department by 51 lb-ft.

Of course output isn't the end of the story, and as you can see the scarlet-clad engineers in Maranello have focused a considerable amount of energy on optimizing the aero package. The front end gets a two-part splitter derived from Ferrari's victorious GT racing program, with vertical fins along the flanks, side skirts extending between the wheels, a dynamic rear wing, vertical fin and a giant diffuser. All of this and more contributes to as much as 50 percent more downforce, aided by increased mechanical grip from the Pirelli racing slicks, with carbon-ceramic brake discs measuring 15 inches across (plus or minus, front to rear) to keep it all in check.

In short, Ferrari has pulled out all the stops, and we wouldn't be surprised to see the FXX K taking the Fiorano lap record for anything this side of an F1 car. The record is currently held by the 333 SP at 1:11, nine seconds ahead of the road-going LaFerrari's 1:20. That's roughly the same differential between the FXX and the Enzo on which it was based, or the 599XX Evoluzione and the 599 GTO. We're looking forward to seeing it try, but just how it stacks up against the P1 GTR which arch-rival McLaren is similarly developing, we may never know as neither will ever take part in any racing series, bound as they'll be by each company's client track program.Continue reading Ferrari reveals LaFerrari-based FXX K in Abu Dhabi
Ferrari reveals LaFerrari-based FXX K in Abu Dhabi originally appeared on Autoblog on Wed, 03 Dec 2014 06:20:00 EST. Please see our terms for use of feeds.
[h=6][/h]Permalink | Email this | Comments