Posts by Ketch Me

Joined Apr 14, 2010
·
86 Posts
So, I've been laying low here in Ptown for the last few days, catching up on sleep and sun, and have barely anything to report because Mr. Adam Levy and I embarked on a 48hr sobriety challenge on Tuesday and I was scared I would blow it if I went out. I know myself well enough to know that the odds of me refusing a "Sex in the Dunes" that some gay boy bought for me because he thinks I'm "outrageous" are slim to none. I did find a nice restaurant for dinner one night that had a whole list of "mocktails", but I'm here to tell you that a "Safe Sex on the Beach" does not measure up in any way, shape or form to a "Sex on the Beach" or a "Sex in the Dunes", let alone a nice small batch bourbon.

The sobriety challenge was definitely not fun, but it did come in handy when I bumped into a girl I wasn't that into (whom I met at the salon earlier that day) on Commercial St and after chatting me up for a bit, she asked if I wanted to continue our conversation over a drink. I could honestly say, after a little pang of panic because I didn't want to hurt her feelings, "oh, sorry, I can't. I'm right in the middle of a 48hr sobriety challenge, maybe some other time..." After taking a few seconds to process that response, she finally came back with, "oh, okay, well maybe when you're done with the, um, challenge..." and gave me her card. Pretty sure she's still wondering if I just made up the whole 48hr sobriety challenge thing to get out of having a drink with her.

I also met a very nice lesbian from Pittsburgh at the salon because when I heard her say she was from Pittsburgh, I couldn't resist telling her that I had just come from there myself (though I made the trip about 3hrs faster ;-)). She told me that it was her first time in Ptown and that she made the trip with her girlfriend and another lesbian couple, prompting me to ask if they had found the lesbian beach. She immediately clammed up, turned red and stared at the ground for a minute before taking a deep breath and letting it all out...

Apparently, she had gotten her gay beach info from a gay boy who had only been to Ptown once before and so sent her to the naked gay boy beach via the infamous dunes that all the boys hike through, stopping for a quick sexual encounter on the way to and from the beach. Suffice to say, they heard things they never wanted to hear and saw things they never wanted to see and were so completely traumatized when it was all over, that the next day they drove directly to the straight beach and never wanted to go to a gay beach again. "Didn't you think that there must be some other beach for lesbians?" I asked, pointing out that "three quarters of the 200+lb lesbians in this town would pass out from exertion before they ever got to that beach." After she granted me that point, I gave her the goods on how to get to the lesbian beach (not to be confused with the naked gay boy beach) and after clarifying that people wore bathing suits on the lesbian beach and nobody would be having sex within earshot, she thanked me profusely and vowed to check it out the next day.

I did finally venture out last night and ended up at a club with the classic Ptown raging queen bartender, who when I ordered a knob creek on the rocks (not one of my very favorites, but best they had), gave me a big wink and sashayed away to get the bottle. Then he sashayed back, poured me a single, then paused to give me another big wink before he kept on pouring until the glass was filled to the brim. When he set the drink down in front of me, with another big wink as he quickly slid his hand up my arm and squeezed my bicep, he assured me, "I love a girl who knows what she wants!" It took all my self-restraint not to respond, "Really? Do you? Really? Because I find that hard to believe...Mr. spaghetti strap tank top, I really do." Instead, I just gave him a big tip and a wink back...didn't want to alienate him before he poured my second drink.

Probably heading home in the near future. I'll let you know when I get there. 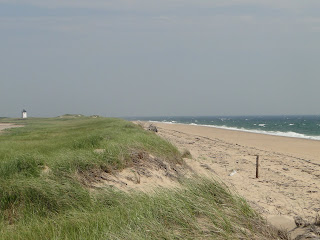 Long Point Lighthouse at the very tip of Cape Cod (had to hike across the lesbian beach, the clothed gay boy beach, the naked gay boy beach and stare down a couple lookouts for the boys in the dunes to get this picture--by the time I got here I was so tired and thirsty I had to turn around) 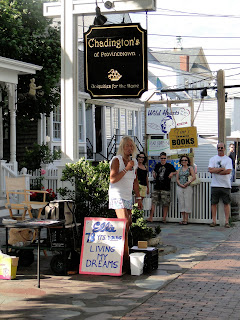 Ellie-"73 years young and living [his/her] dreams" belting out his/her best "New York, New York" on Commercial Street. Not half bad, drew quite the little crowd on the street. 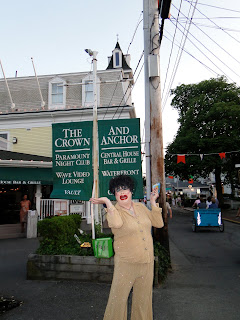 Dina Martina, on Commercial St promoting his/her 9pm show. Funniest comedian I have ever seen and a Ptown institution (though he/she does gigs in NYC, LA & London and has all kinds of famous comedian fans, like whoopi goldberg). The first time I saw his/her show, I couldn't sit up in bed for a couple days after because my abdominal muscles were so tweaked out from laughing so hard for so long (literally had to roll over and do a push up and drag my knees under me so I was kneeling to get out of bed). There was also a fair amount of crying and maybe a little peeing in my pants involved... 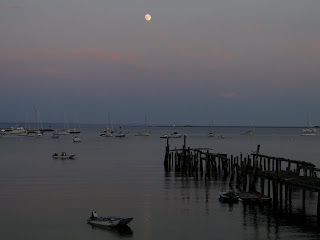