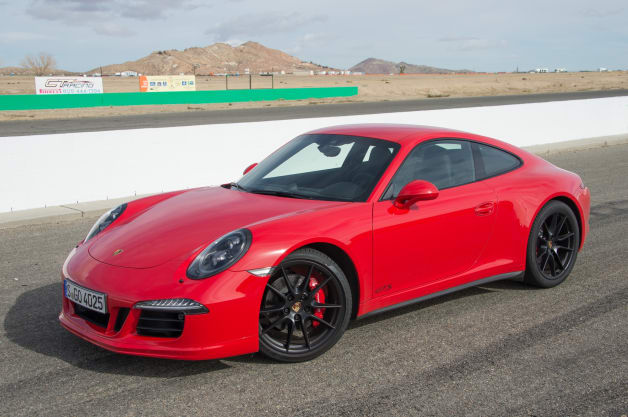 UPDATE: An earlier version of this story referenced the 911's six-speed manual transmission, but of course, Porsche uses a seven-speed manual in this car. The text has been changed to reflect this.

There are no fewer than 19 different models in today's Porsche 911 series. While each appeals to the enthusiast, the race-bred GT3 is the pinnacle of the automaker's rear-engined lineup. Unfortunately, and despite the GT3's racing circuit prowess, its rigid track-tuned persona is too grating for many as a daily driver. To satisfy those who put sporty driving dynamics at the top of their list, but don't want to compromise comfort, Porsche has introduced the 2015 911 Carrera GTS.

Raising its performance quotient, the GTS model boasts a handful of standard features that elevate it above its Carrera S siblings. Mechanically, it features an enhanced 3.8-liter flat-six bolted into the tail of the widebody platform (shared with the Carrera 4 and GT3). Other goodies include Porsche Torque Vectoring (PTV), Porsche Active Suspension Management (PASM), a black-tipped Sport exhaust system and centerlock 20-inch 911 Turbo S wheels (five-lug wheels are a no-cost option). Cosmetically, the GTS is differentiated by its darkened lights, painted black wheels, Sport Design front spoiler, Sport Design exterior mirrors, black engine grille, rear black louvers (or lights on all-wheel drive models) and a 'GTS' logo on the lower doors. Inside the cabin are standard Sport Plus seats, Alcantera upholstery throughout with contrasting stitching, black gauges and anodized black aluminum trim.

Offering us an excellent opportunity to put the second-generation GTS through its paces on a variety of roads, Porsche tossed us the keys in the LA Basin and pointed us towards Willow Springs Raceway, in the Mojave Desert.

Driving Notes
After a long day, we were left thoroughly convinced that the 2015 911 Carrera GTS is a fine compromise to the GT3, effectively earning our praise as the all-around enthusiast's choice in the 911 model lineup. If we were in the market for a premium European sports car, capable of absorbing a weekday commute and then ripping up a track on the weekend, we'd skip over the Carrera S and begin our search with the 911 Carrera GTS - it is that good.2015 Porsche 911 Carrera GTS [UPDATE] originally appeared on Autoblog on Mon, 01 Dec 2014 11:57:00 EST. Please see our terms for use of feeds.
[h=6][/h]Permalink | Email this | Comments