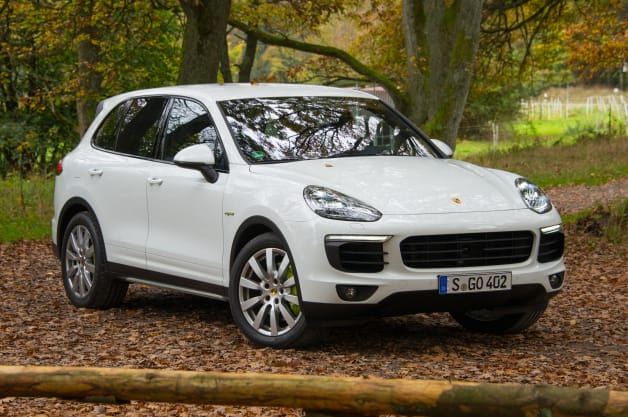 Think of the electric motor in the facelifted 2015 Porsche Cayenne S E-Hybrid as the cream filling in an Oreo cookie. Under the hood of this plug-in hybrid crossover is a 333-horsepower, supercharged 3.0-liter V6 with a 95-hp synchronous electric motor sandwiched between it and an eight-speed Tiptronic automatic transmission. The clutched powertrain allows pure combustion, pure electric or a combination of both to drive all four wheels through Porsche's permanent all-wheel-drive system.

Differentiating itself from the Panamera S E-Hybrid sedan, which shares the same basic powertrain and stores energy in a 9.4-kWh battery, the Cayenne crossover is fit with a more robust 10.8-kWh lithium-ion battery that delivers an estimated pure-electric driving range of up to 22 miles at speeds of up to 78 miles per hour.

To be one of the very first US media members to sample Porsche's latest fuel-efficient crossover, the automaker flew us to Frankfurt, Germany, to test the five-passenger Cayenne S E-Hybrid on its home turf.

Driving Notes:
We really like the updated 2015 Porsche Cayenne S E-Hybrid, but not simply because of its newly extended electric range and improved efficiency. More important, we are impressed by how well engineers have been able to seamlessly integrate such a complex hybrid system within the midsize crossover, yet take very little away from its enthusiast-tuned driving dynamics.2015 Porsche Cayenne S E-Hybrid originally appeared on Autoblog on Mon, 03 Nov 2014 11:57:00 EST. Please see our terms for use of feeds.
[h=6][/h]Permalink | Email this | Comments