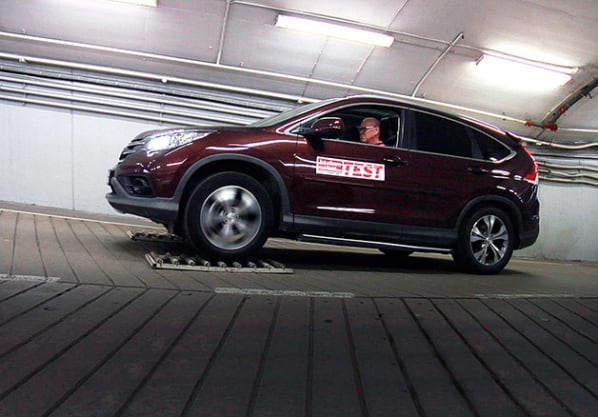 Swedish auto magazine Teknikens Värld has never been afraid to call out automakers when a vehicle fails one of its battery of examinations. Its famous Moose Test recently caught the Porsche Macan out, and a few years ago, there was a protracted argument between Teknikens Värld and Jeep over the performance of a Grand Cherokee in that evaluation.

This time, the 2015 Honda CR-V is raising the magazine's hackles, but it has nothing to do with avoiding a giant mammal. Snow is obviously an issue in Sweden, and Teknikens Värld has a test that challenges all-wheel drive systems in low-traction settings. On a slanted surface, the Swedes put the vehicles' front wheels on rollers with no traction and demands the rears accelerate away. The Honda couldn't do it. Teknikens Värld claims that it initially found the same result last year from the European CR-V, but Honda Sweden put out a software upgrade correcting the behavior in the test. This year, the CUV went back to failing.

While that's the magazine's side, Honda Sweden doesn't see the test as fair. In a statement to Teknikens Värld, the company explains the way the CUV's all-wheel drive system works. It also claims that the test isn't simulating a realistic situation. "In real conditions, regardless of the surface, there is a certain amount of friction always available for both front and rear wheels," the announcement says. "A scenario like the roll test with such a high difference in grip between the front and the rear wheels is highly unlikely."