Report: Are you the Porsche Pajun? 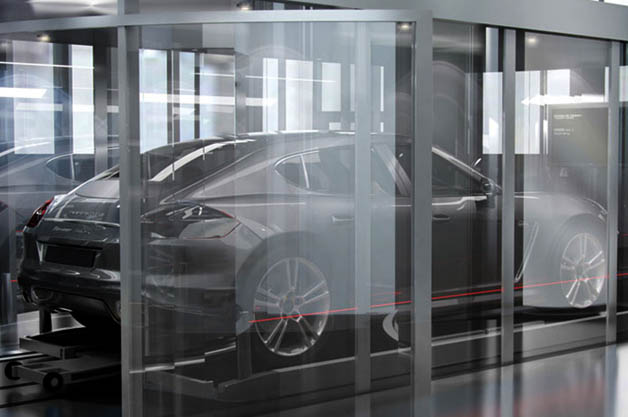 The prospect of Porsche building a smaller version of the Panamera has been an on-again, off-again proposition as the German automaker seems to go back and forth on the project. Last we heard, Porsche had pushed back the so-called Pajun (shorthand for Panamera Junior) until 2019 at the earliest, but we could be looking at it right here.

The automaker's everything-but-automotive division Porsche Design is working on a luxury condo complex called (simply enough) Porsche Design Tower. It's been three years in the making and will take at least another year or two to complete, but the gist of it is that the 57-floor building will include 132 apartments, each with its own en-suite garage in which the residents' cars will be parked thanks to giant elevators.

Porsche Design released a series of renderings showing what the property will look like once complete. Most of the renderings feature Porsches, of course - production models you can find in any of the brand's showrooms, like the one just 23 miles away in Coral Gables. But one of the renderings of the giant glass elevators shows something rather unusual.

At first glance, it looks like a Panamera, only it's smaller and rides on a shorter wheelbase with tighter overhangs. Styling features (particularly around the taillights) are similar to what you'd find on the latest Cayman. Interestingly, this vehicle shares the Panamera's awkward-but-space-efficient roofline, a design feature we've heard Porsche is keen to eradicate on the model's next generation.

Could this be the fabled Pajun that Porsche has been working on? Possibly. But that doesn't mean the design has been green lighted, or that this will be the form which the production model - if and when it finally arrives - may necessarily take. Still, it's an interesting glimpse inside the crystal ball at Porsche's design studios, even if it turns out to be just a fantasy.