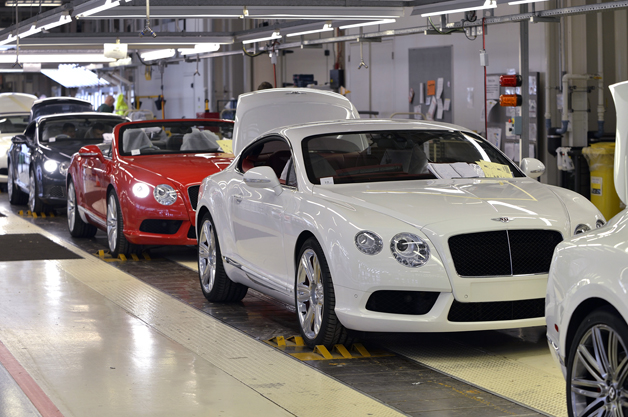 Would a Bentley be a Bentley if it weren't manufactured in Great Britain? Would a Lamborghini be a Lamborghini if it were built outside of Italy? It may be hard to say either way, but we might find out sooner than later, because the latest word coming in from Europe is that the Volkswagen Group is considering expanding production for both these upscale brands outside their traditional homes.

According to the Autovisie section of Dutch newspaper De Telegraaf, the issue for both automakers comes down to their ambitious expansion programs. Both Bentley and Lamborghini plan to launch new SUVs - the former's being well under way, the latter's still awaiting approval - that would expand their annual production considerably: by 50 percent in Bentley's case, and by as much as 100 percent in Lamborghini's.

For now, both marques intend to handle the added production with additional assembly lines at their current facilities in Crewe and Sant'Agata Bolognese, respectively. But both could soon outgrow their relatively small plants - and with the Volkswagen Group operating countless factories across Europe and around the world, it wouldn't be hard to see these manufacturers shifting excess production outside of their home countries.

It wouldn't be without precedent, however. Volkswagen previously built the Continental Flying Spur for Bentley alongside the Phaeton at its state-of-the-art factory in Dresden, Germany. The bodywork for the Huracán is already made for Lamborghini in Germany, as well. Rival luxury automaker Jaguar Land Rover, for example, is opening new factories outside of the UK for the first time, with new plants opening in India, China, Brazil and possibly the United States.

Sister company Porsche has all but the final assembly of its Cayenne (the next iteration of which is expected to share its underpinnings with the Bentley and potential Lamborghini crossovers) performed for it alongside the VW Touareg and Audi Q7 in Slovakia, though final assembly takes place at its own factory in Leipzig, Germany. Cayenne production, however, is slated to shift entirely to the Bratislava plant, and it wouldn't be much of a stretch to imagine the same factory - which is expected to perform much of the production work for both - handling production of the Bentley and Lamborghini crossovers as well, from start to finish.