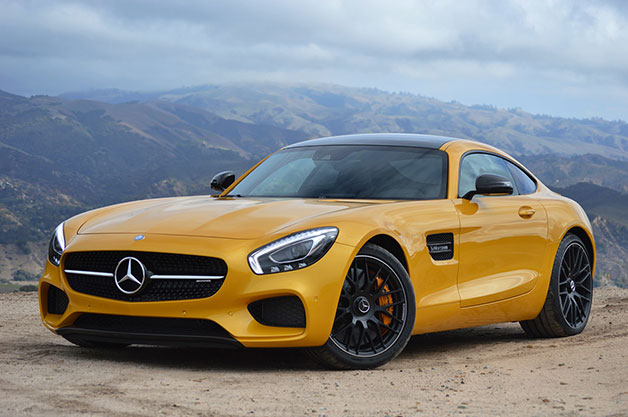 Our life with the Mercedes-AMG GT has only just begun, and a full life it looks like it will be. The latest in preposterous two-doors from AMG is launching in GT and GT S flavors, but a few more branches of the family tree are already planned: a racing entry for the FIA GT3 championship is scheduled to appear in 2016, giving the current SLS AMG GT3 another year to gobble up victories before it takes a drive across the Styx.

More exciting for those who only suit up on Sunday for church, whispers are that a we'll also get a streetable version of the race car - not called "GT3" because that alphanumeric is owned by Porsche, but definitely aimed at its Stuttgart rival. AMG boss Tobias Moers told Autocar the objective for that car is "more power, less weight, better aerodynamics and different suspension but the targets should be the power to weight ratio, drivability, lap time and tremendous feel." Those targets will be aided by a carbon fiber weight-loss regime of up to 220 pounds and more power - perhaps 550 horsepower - from the currently "very understressed" engine.

Supposing that still isn't enough for you, then the Black Series version should curl your toes, if you can wait until 2018 for it.Mercedes AMG GT3 racecar due in 2016 originally appeared on Autoblog on Sun, 23 Nov 2014 09:01:00 EST. Please see our terms for use of feeds.
[h=6][/h]Permalink | Email this | Comments