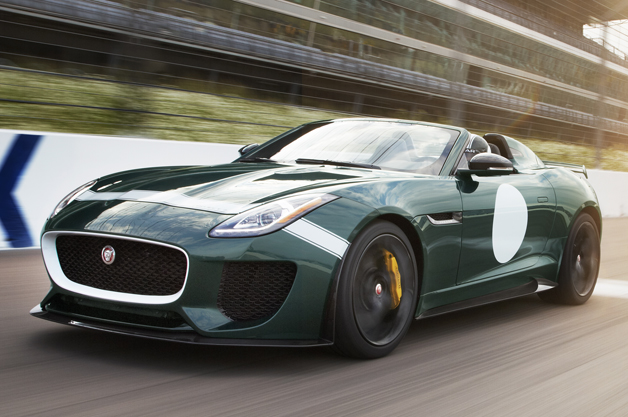 Most British automakers have some manner of racing program. Aston Martin, Lotus and McLaren race as a matter of course. Bentley recently got back into racing, Morgan has dabbled here and there, even Land Rover has its off-road racing programs. The only one, it seems, that isn't racing these days is Jaguar... but that could be about to change.

The latest intel from the UK suggests that Jaguar is closely evaluating the prospect of building a GT3-spec racer based on the F-Type. Like the Bentley Continental GT3 co-developed with M-Sport (not to mention Coventry's own successful partnership with TWR), the Jaguar program would need an established racing outfit to help develop the car and field it, and the automaker is said to be evaluating three potential partners.

The development of the GT3 racer would allow Jaguar to compete (or sell cars for others to compete) in a variety of racing series around the world, including the Blancpain Endurance Series, the European Le Mans Series and, if properly adapted, other series like the United SportsCar Championship and the 24 Hours of Le Mans. Jaguar's car would have to compete with such rivals as the Aston Martin Vantage GTE, Audi R8 LMS, Ferrari 458 GT, Mercedes-Benz SLS AMG GT3 and Porsche 911 GT3 R.

Current FIA GT3 regulations use a Balance of Performance equation that allows for a curb weight between 1,200 and 1,300 kilograms (2,645 to 2,866 pounds) and produce between 500 and 600 horsepower. A more cost-effective GT4 racer could follow. But the best part is that Jaguar could, according to the report in Autocar, develop a road-going version as well, even more focused than the Project 7 pictured above and similar to what Bentley did with the Continental GT3-R.

Jaguar of course has had a rich history with motor racing, reaching back to its dominance at Le Mans in the 1950s with the C-Type and D-Type, extending through the TWR partnership in touring car and endurance racing in the 1980s and 90s, to the short-lived Formula One team that became Red Bull Racing. It launched a GT2-spec XKR a few years ago and was tipped to be developing a new LMP1 prototype, but neither are on the track today, where Jaguars only compete in vintage racing.Jaguar to go racing with F-Type GT3? originally appeared on Autoblog on Sat, 22 Nov 2014 08:59:00 EST. Please see our terms for use of feeds.
[h=6][/h]Permalink | Email this | Comments