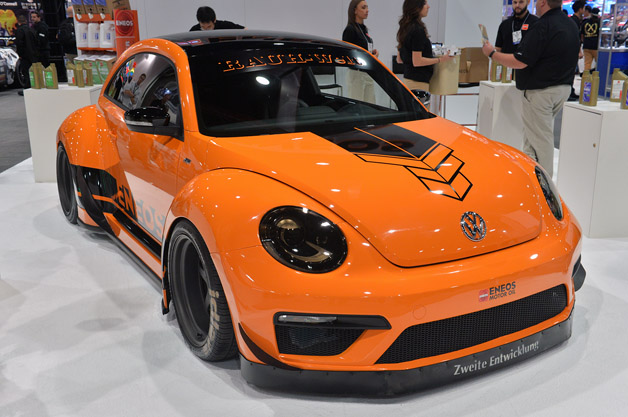 "Many Porsche owners like the Beetle. The Beetle is a very good car and it looks like a Porsche a little bit," according to Akira Nakai, the man at the helm of Japanese tuning house RAUH-Welt Begriff. "It is similar, but a Beetle is not a Porsche, so we made a completely new design for this Beetle."

We like the VW Beetle for what it is, and these days that's, basically a front-wheel-drive economy car with a bit more fun baked in than is typically seen in its segment. Yes, it once had ties to Porsche - designed as it was by Ferdinand Porsche in the mid-1930s using a similar rear-mounted, air-cooled engine as early Porsche sports cars - but those ties have long since vanished.

That out of the way, Nakai has teamed up with racer and Top Gear USA host Tanner Foust to create the machine seen above. Exterior modifications include a body kit that widens the Bug by eight inches, allowing it to hunker down nicely over a custom set of 18-inch Motegi Racing Traklite wheels. We're not sure what, if any, changes have been made to the drivetrain, but rest assured, it's almost certainly nowhere as performance-minded as the 560-horsepower all-wheel-drive Beetle GRC Foust will pilot at the Las Vegas round of the Global Rallycross Championship tomorrow evening...Tanner Foust Racing ENEOS RWB Beetle is more pumpkin than Porsche originally appeared on Autoblog on Tue, 04 Nov 2014 17:30:00 EST. Please see our terms for use of feeds.
[h=6][/h]Permalink | Email this | Comments