Joined Oct 20, 2017
·
15 Posts
Hi SM_ATL
Good to see you back in a Porsche! Thanks for posting up your Cayman S. You may remember your old alcantara shift knob sold to me several years ago:
(Like a fool I sold this GT3)

stpatsday said:
Hi SM_ATL
Good to see you back in a Porsche! Thanks for posting up your Cayman S. You may remember your old alcantara shift knob sold to me several years ago:
(Like a fool I sold this GT3)
Click to expand...

LOL, thanks for the pic! This brings back good memories from my time in the US :thanks:

The refinished steering wheel arrived this week and the swap/trim transfer was fairly easy with plenty of DIYs available online. The wheel is definitely thicker than OEM (a little too much in fact, but I am happy with it nevertheless).

A couple of weeks ago, I had also installed an iPhone holder that is very convenient to run Waze or Coyote (radar detectors and laser jammers are illegal in Europe ) and Harry Laptimer on the track. The good news is that ProClip products are also available on this side of the pond.

Fuggles said:
Looking forward to the recaro post! Did you get pole positions? and BK mounts?
Click to expand...

So do I, but it takes forever to get them delivered I indeed went for Pole positions -in black nappa leather- but with GMG seat bases. I will probably not go to the track until next spring, so I will take care of harnesses a bit later.

Joined Aug 14, 2011
·
243 Posts
Sorry for the late response. I am not sure the forum allows to post references of companies that are not sponsors so I just PM'd you a few minutes ago.

Looking forward to see you around the track in 2018. :drivingskid:

SM_ATL said:
Looking forward to see you around the track in 2018. :drivingskid:
Click to expand...

Joined May 24, 2009
·
2,574 Posts
Serg, you were right about getting over my concern about turbos . I ordered a 2019 Cayman Base in May. Night Blue Metallic over Agate, PDK, 19" Cayman S wheels, Colored Center Caps, 14 Way Seats, Premium, PASM, Chrono Sport, LCA, Sport Steering Wheel, Model Delete, Sport Pedals, Polished Twin tips, Polished Trim around windows, Apple Car Play.........Ordered in May, due end of November.

There is a saying that goes like "if you track it, be ready to wreck it"... I have experienced it and can only agree with this statement. On June 5th I took part in what should have been a nice, relaxed and sunny trackday at Spa Francorchamps like many times before. 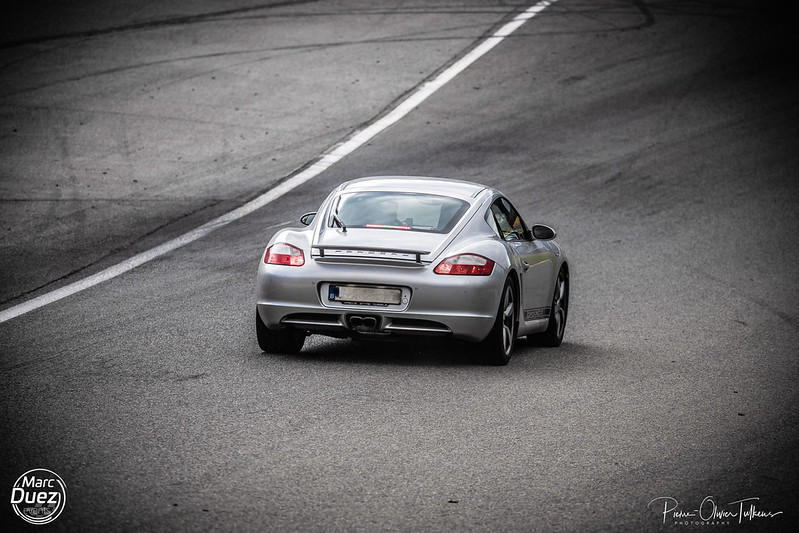 It so happened that teams of the Peugeot 308 Pro Cup had been authorised to train and share the track with us, which turned out to be a very poor decision from the organiser or track managers. The Peugeots were behaving in a way too aggressive manner and did not respect the trackday etiquette at all.

I was gently passing an old BMW 6-Series in the Raidillon -passing in the Raidillon is nothing special with a bit of experience- when an @sshole Peugeot driver attempted to pass me at the same time driving outside the normal limits of the track. He was not going fast enough and instead of tapping the brakes and waiting a few seconds to pass me safely, he kept going, then realised he was going to end up in the grass, steered right and hit me. Fortunately (?) I had my GoPro mounted at the front of the car to understand what happened. I was paying attention to the car I was passing and not checking in my left rear view mirror what the Peugeot was trying to do at the same time Here is a slow motion video of the crash. I was still at almost 100mph when I got hit and spun multiple times, hitting the BMW (looking at the video, it looks like I am rolling over, but it is only the GoPro getting loose and flying up in the air).


The good news is that nobody got hurt, the airbags deployed in both the BMW and my car and we walked out of the wrecks without a scratch despite the fact that we did not have bucket seats with harnesses or a HANS device. The Cayman on the other hand was damaged beyond repair as you can see from the following pics. The front suspension was destroyed, the chassis was bent etc. Even if it could be fixed, it would have cost 2 or 3 times the value of the car... 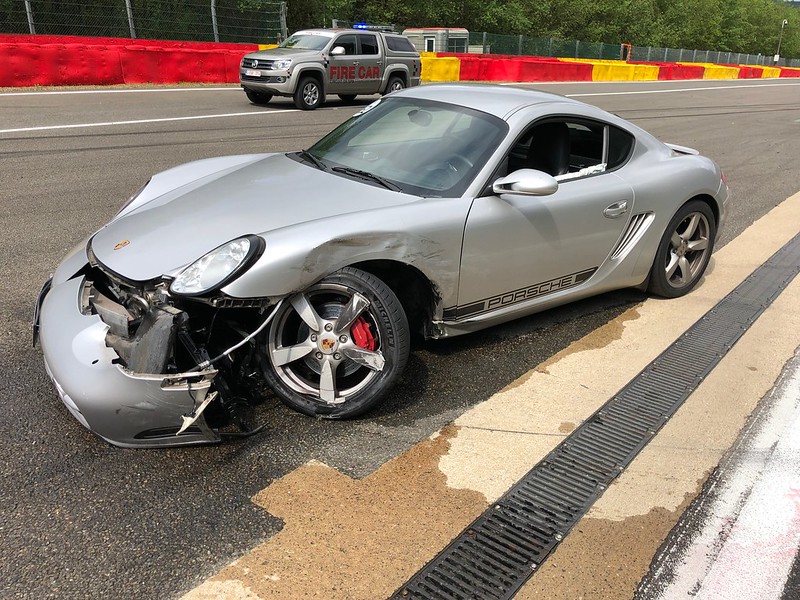 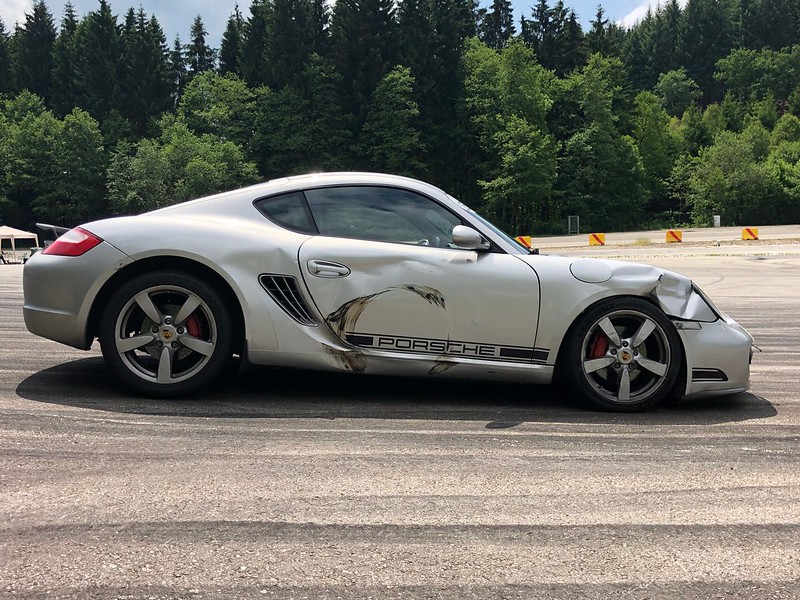 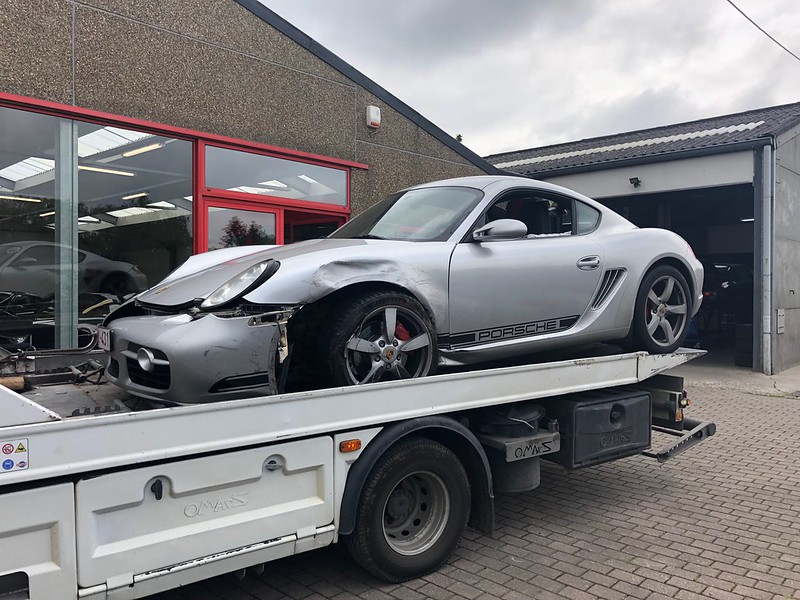 I always use a track insurance coverage and we came to an OK resolution, getting the value of the car back minus the agreed deductible.

I do not feel emotional about the whole thing. Again, when you go to the track, you know it can happen and you might be the best driver in the world -which I am certainly not-, there are always other guys around you who can screw up. The Peugeot driver definitely did and these guys had nothing to do with the rest of us in Spa that day. Next time I register for a trackday, I will make sure only 100% amateurs are participating... Lesson learnt

This closes this thread. Since June 5th, I have done some shopping and acquired a 2017 718, but this will be a story for a new Journal to come.:burnout:
41 - 51 of 51 Posts
Join the discussion
Continue with Facebook
Continue with Google
or sign up with email
Recommended Reading
Read More
Read More
About this Discussion
50 Replies
11 Participants
Last post:
SM_ATL Jul 7, 2019
Planet-9 Porsche Forum
Porsche Cayman Forum Boxster 911 Cayenne Panamera Macan Discussion powered by Porsche Enthusiasts Planet Wide!
Full Forum Listing
Explore Our Forums
987 Cayman and Boxster Chat 987 Cayman and Boxster Modifications 981 Chat Automotive Off Topic 987 Cayman and Boxster Problems and Complaints
Popular Communities