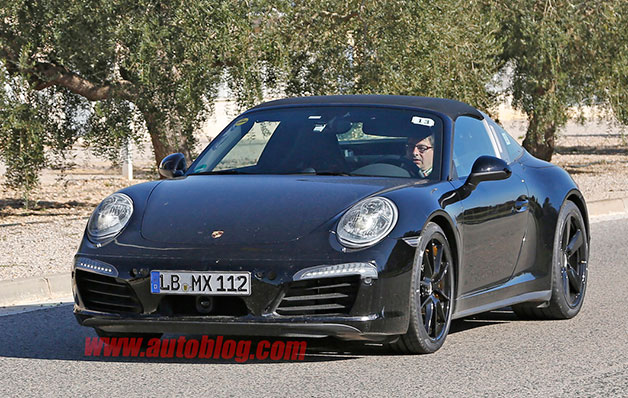 Our spy shooters have caught a strange, mash-up beast wearing a Porsche badge. Superficially, this is a facelift for the 911 Targa that features new bumpers, door handles and a redesigned engine cover, along with new light graphics for the front and rear lights.

But have a look around back, and you'll find two inboard exhaust pipes; they aren't right up against each other as on the 911 GT3, but are spaced about five inches apart. The shooters said the first time they saw that arrangement was last winter, on a convertible during testing. We saw it again more recently in spy shots of what was thought to be the 911 GTS coupe prototype at the track. But when the production GTS arrived, it wore the traditional quad-pipe at the corners.

The theory put forward by the spy photog: the current GTS has a naturally aspirated engine, but facelifted prototypes they've been seeing all have turbo engines, so this could be the facelifted Targa coming in 2017, after the 991-model 911 gets a refresh. In that case, the GTS coupe prototype at the track would have also been a post-refresh, turbo-engined GTS.

It's only a hypothesis, but more than one outlet has reported that Porsche is going all-turbo for the updated 2015 models - the new exhaust position and those 911-Turbo-like vents could be their identifiers. We expect to find out when the lineup is unveiled at the 2015 Geneva Motor Show, possibly codenamed 992 instead of 991.2.Are you the 2017 Porsche 911 GTS Targa? originally appeared on Autoblog on Sun, 30 Nov 2014 12:59:00 EST. Please see our terms for use of feeds.
[h=6][/h]Permalink | Email this | Comments