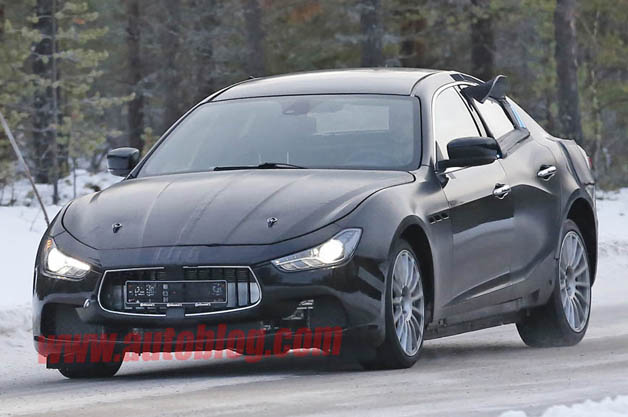 Well well well, what have we here? The truth is that we don't know. It seems to be a Maserati Ghibli, but since that model is already out on the market, we're likely looking at something else. Just what is the question, and the answer likely lies in the wheelbase. While this test mule, spied undergoing cold-weather testing in northern Sweden, is clearly wearing the bodywork (and likely most of the mechanical bits) from the Ghibli, it's riding on a shortened wheelbase. Which tells us this could be one of two things: it's likely to be a test mule either for the upcoming Maserati Alfieri sports car, or for the new Alfa Romeo Giulia.

The Alfieri was presented in concept form at the Geneva Motor Show back in March, foreshadowing a new sports car to serve as a halo model in the Maserati lineup. The production version is expected to be smaller and nimbler than the existing GranTurismo and positioned against the likes of the Porsche 911, Jaguar F-Type and Mercedes-AMG GT, to name just a few.

The Giulia, meanwhile, is slated to be the first all-new Alfa Romeo since the arrival of the 4C last year and the Italian marque's first mainstream model since the launch of the Giulietta in 2010. The new sedan is expected to go after the likes of the BMW 3 Series and the new Jaguar XE, slotting in below the larger Maserati Ghibli that seeks to challenge the 5 Series and XF. If this is indeed a test mule for the new Alfa sedan, the quad tailpipes would seem, as our spy photographers point out, to indicate it's laying the groundwork for the GTA performance version.

One way or another, there's something enticing to be coming soon from Italy, so watch this space.Mysterious Maserati test mule could be upcoming Alfa Romeo Giulia originally appeared on Autoblog on Mon, 08 Dec 2014 10:31:00 EST. Please see our terms for use of feeds.
[h=6][/h]Permalink | Email this | Comments