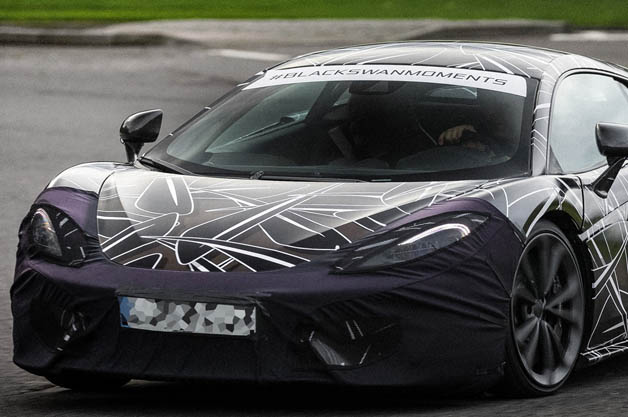 Hot on the heels of confirming its upcoming "entry-level" model, McLaren has released a solitary teaser image of that new vehicle undergoing testing.

Known until now as the P13, the McLaren Sports Series is set to take on the likes of the Audi R8 and Porsche 911 GT3. Like the rest of the F1-team-turned-supercar-manufacturer's lineup, it'll be built around a carbon monocoque with a V8 engine mounted amidships - widely expected to be a detuned version of the 3.8-liter twin-turbo unit that has already found its home in the 12C, 650S and P1, mated to a seven-speed dual-clutch transmission.

Although the teaser image above only shows part of the car, and is wearing all manner of camouflage, it definitely looks like a modern McLaren. You can see the telltale swoosh-shaped LED headlights peering from behind the mesh cladding and ten-spoke alloys spinning away, with wing mirrors mounted to the doors (like on the P1) instead of the window frame (like the 650S).

Beyond that there's not much to tell at this point, but you can see that the cockpit will (at least initially) feature a two-seat layout and not the 2+2 arrangement that could still follow - or, for that matter, the 1+2 central driving position of the legendary McLaren F1, an arrangement Woking ruled out for its modern fleet of supercars due to practical considerations like toll booths and parking gates.McLaren teases new Sports Series in development originally appeared on Autoblog on Mon, 10 Nov 2014 16:01:00 EST. Please see our terms for use of feeds.
[h=6][/h]Permalink | Email this | Comments