Joined Apr 14, 2010
·
86 Posts
I'm just sharing a quick recap of the last two days as I sit here in Jamaica Kincaid's kitchen in Claremont because when she walks through the door again, we are off to the Mojave (and maybe Death Valley) for a couple more days of sightseeing before I hit LA.

I had one sunny day of surfing and running on the beach in San Diego on Friday, but when I woke up on Saturday to some not so sunny weather, I decided, after walking the length of the boardwalk and grabbing lunch at Tower 23, to make my way up the coast to Claremont (via S-21 to 101 to 1, then turning inland at Huntington Beach). I have to say that the drive was not as beautiful as I thought it would be because you really don't get to see the ocean very often...and the traffic was pretty bad (I also might be a little jaded at this point in my trip). I'm hoping the coastal drive from LA to San Francisco is more impressive...dare to dream.

As for yesterday, after an unsuccessful attempt to rouse me at 7am followed by another unsuccessful attempt at 9, Jamaica finally managed to get me out of bed around 11:30 and after chugging a couple cups of coffee we were off to Palm Springs for a quick lunch. Jamaica, who had never been to Palm Springs before, loved it, mostly because she was fascinated by the existence of this bizarrely artificial town (complete with transplanted trees and plants that would never grow in the desert) dropped in the middle of the desert. She kept saying "this whole town is a movie set, it's just bizarre, I love it." Suffice to say by the time I shared a few stories about the last time I was in Palm Springs (for Dinah Shore, a long weekend of lesbian parties-pool parties all day and clubs all night), from the crazy girls to the crazy drama, this lover of all things bizarre was counting down to next year's Dinah Shore. About every hour for the rest of the day she would exclaim, "I just can't wait for this Dinah Shore." Mind you, she's not gay, just fascinated by bizarre things and people. So, I finally had to break it to her that she could only join me for one night of gawking at crazy drunk lesbians at the next Dinah and then she would have to go, since it's kind of a given that she's going to mess up my game. She digested this quietly and made no promises...

After lunch we headed to the Salton Sea (a brief history: a long, long time ago the Pacific used to reach all the way to the Colorado, but over time the pacific receded and in the early 1800s the course of the Colorado changed so that it flowed toward the gulf and the area where the Salton Sea is now dried up until there was a huge flood in 1905 that over the course of 16 days filled the Salton Sea again, and now it gets saltier by the day as water evaporates and no new water comes in except for a little run off from the irrigated farmland in the area and the occasional little rain shower in the desert). After the Salton Sea, we set off to find the Imperial Sand Dunes (just north of the border with Mexico) admiring the scrumptious Chocolate Mountains all the way. The dunes were definitely the most awe-inspiring sight of the day, but the Chocolate Mountains were a close second mostly because their beauty was a total surprise-you never hear about them and they are just incredible to look at, so different than any other mountains we had ever seen. Somewhere around 9pm we circled back to Palm Springs via I-10 for dinner and a couple Margaritas before heading home.

It's been a while since my last drag racing story, so I will tell you that we had some fun on I-10 with a very obnoxious guy in a corvette who kept trying to get us to race him. I was tempted, but since Jamaica is basically a national treasure, I was reluctant to break 115 with her in my car, so we just slowly drove this guy crazy by being unshakeable while barely engaging. He kept slowing down to be right next to us and then kicking it up to around 130 trying to leave us in the dust, but within a couple seconds we would be right behind him letting him go ahead of us in the passing lane (because he kept trying to pass on the right and would inevitably get stuck and want to come back). In the final maneuver, after about 40 minutes of dealing with this guy, we passed him and parted ways before he had the chance to pass us again which I'm sure drove him out of his little mind. This was the closest thing Jamaica had ever experienced to drag racing and her instructions alternated every 10 seconds between "oh, let's just let him go" and "maybe just a bit more, this is so fun." When it was all over, she was definitely feeling the adrenaline and kept exclaiming how much fun it was and how great it was that we won in the end and then observed, because she's Jamaica, "I think what was really wonderful about that is just the amount of people you entertained on this highway. I mean it's just wonderful really. People get so bored when they drive and that must have been so entertaining to watch that I'm sure people really appreciated it." Yes, I'm sure they did...mostly because they lived to tell the tale. 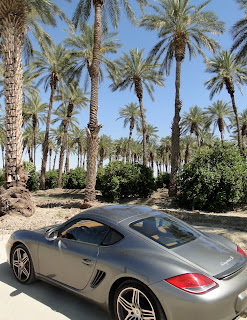 Date and grapefruit trees in Indio in the Coachella Valley. When Jamaica informed me that Indio is the "date capital of the world," I asked, "because of all the romantic restaurants or..." straining to spot any restaurant in the irrigated desert around us. To which she replied, "no, darling, dates, the things that grow on trees." ah, then it all made perfect sense as we were surrounded on all sides by these trees. 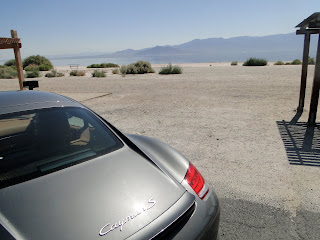 The Salton Sea. I will spare you the close-up of the shores covered in dead Tilapia. 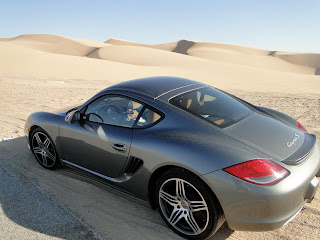 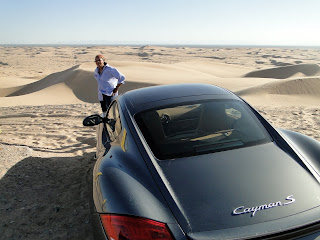 This is where I'm telling Jamaica that she is going to have to push my car to help me get unstuck after she explicitly warned me that if I drove this far out I was going to get stuck. Kids... 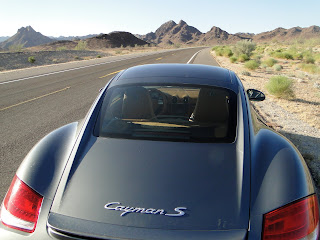 Driving through a little smudge of the Chocolate Mountains 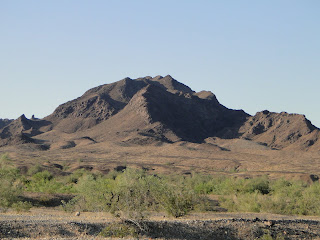 A morsel of the Chocolate Mountains​