Trouncing a Carrera en route from Beaufort to Charleston

Joined Apr 14, 2010
·
86 Posts
​
Woke up in Beaufort in a bit of pain thinking we probably should have skipped the $14 bottle of “Champagne” we had at the last bar we hit. Now, in our defense, purchasing a bottle of “Champagne” that cost more than $14 was not an option at this charming establishment. After a 20 minute hunt for a place that sold coffee we could walk out the door with, we made a quick trip to the maritime museum in Beaufort where we learned that after Blackbeard barricaded the Charleston, SC harbor, he ran his ships aground just off Beaufort, marooned most of his men, then slipped away to Ocracoke where he was eventually hunted down and killed. After the museum, we paid a guy $30 to take us to Shackleford Island in his Boston Whaler where we spent a couple hours trying to find the wild horses (Spanish mustangs) that are the descendants of horses that swam ashore 400 years ago after a shipwreck off the island. Eventually we did and only suffered a few puncture wounds along the way.


Then it was off to Charleston, SC and not a minute too soon. When two lanes merged into one as I was getting my plug baby set up and the result was a slow tractor trailer in front of us I actually said to E, “damn it, if I hadn’t been fiddlin’ ‘n’ diddlin’ we wouldn’t be stuck behind this guy right now.” We immediately looked at each other in horror and I said what we were both thinking, “we need to get out of North Carolina, I’m starting to fit in,” to which E replied “um, yeah.” Somewhere after we crossed into SC and passed our first 5 fireworks stores, a fairly obnoxious character in a burgundy carrera cabrio (I think an ’06) noticed us passing him, jumped off his call, pulled up to us at the next light and started revving his engine and staring at us to see if we were up for the challenge. I am delighted to report that I trounced the guy and when I hit 70 and shifted into neutral to coast for a bit, he passed me laughing and shaking his head in shame. Das right. Respect the Cayman S fool. One and a half wins and counting . . . 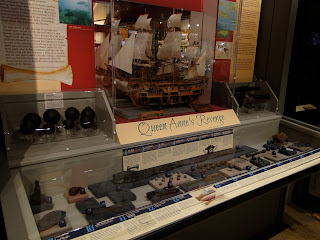 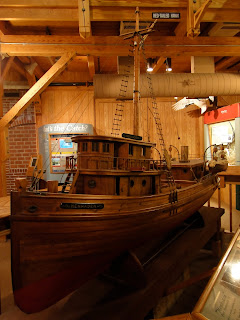 Most beautiful model boat I have ever seen. This is a model of a Menhaden boat, which used to be built in NC and used off the NC coast to fish for Menhaden. 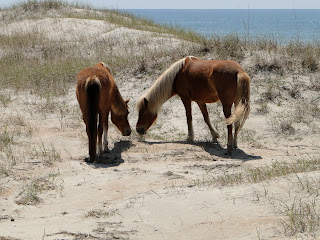 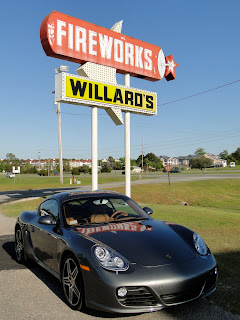