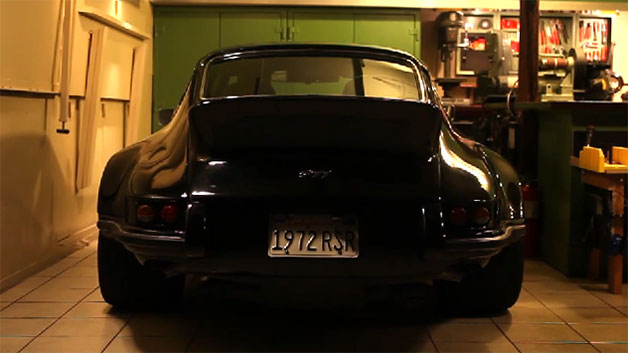 Almost two years ago we wrote about the 12-Gauge Garage Jack Olsen built to house his multifarious Porsche 911 - its 1972 bodywork hides four decades of Porsche parts, like the transaxle from a 1977 911 and the engine from 1995 911, for example. It weighs 2,400 pounds and has 272 horsepower, and Olsen uses it daily driving and for track days, the latter excursions featuring homemade, bolt-on aero parts.

German magazine Auto Bild stopped by Olsen's house to look in on the Porsche called "Black Beauty II," and we get a few more details about the mods he's made, like swapping out for fiberglass body panels and welding Fuchs wheel centers to wider Corvette barrels so he could run different tires.

Most importantly, though, Olsen divulges his passion for lowering his lap time at Willow Springs. Randy Pobst set the lap record for a production car around the 2.5-mile Big Willow track in a Porsche 918 Spyder at 1:23.54 during a Motor Trend test (the outright record, according to Willow Springs, is held by Michael Andretti at 1:06.050 in a CART car). Further down the list, Steve Millen drove a 415-hp 911 GT3 RS around the same track in 1:33.14 - a car 600 pounds heavier than Olsen's. Over the past 14 years of tinkering with his car, Olsen says his data shows his lap time is now down to 1:26.88, achieved on the day of filming the Auto Bild video. That time would put him in between the 1:26 flat posted by Dominik Farnbacher in a 608-hp Dodge Viper SRT-10 ACR and the 1:28.93 put up by Pobst in a 400-hp, 991-series 911. You can hear Olsen tell it in his own words in the video.Continue reading Jack Olsen built a Porsche 911 to drive every day and conquer Willow Springs
Jack Olsen built a Porsche 911 to drive every day and conquer Willow Springs originally appeared on Autoblog on Sun, 14 Dec 2014 20:01:00 EST. Please see our terms for use of feeds.
[h=6][/h]Permalink | Email this | Comments