Video proof that LaFerrari has a pure electric mode 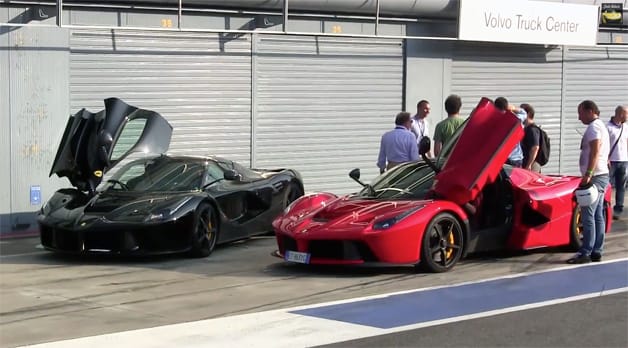 Typically, a hybrid car, with its gas engine and an electric motor/battery pack is able to run on both forms of propulsion independently of each other. That means you can sip gas, run on pure electricity or some variation there of. The Ferrari LaFerrari is not like other hybrids.

See, the successor to the Enzo has batteries, an electric motor and a great, thumping V12 engine, but unlike its rivals from McLaren and Porsche, it has no standalone electric mode. That's been Ferrari's party line since day one. But have the Italians been exaggerating a bit? Judging by this video, it seems like a real possibility.

The video comes from what we're guessing is a European track day. It shows a black LaFerrari stealthily sailing through a tunnel on pure electric power, which it shouldn't be able to do, before its 789-horsepower V12 fires to life.

So, what does this tell us? Well, it's quite obvious that you can drive a LaFerrari on nothing but electric power. As for why Ferrari doesn't advertise this fact, we're inclined to agree with the folks at Jalopnik, who uncovered the video. It's more than likely that the hypercar's EV range is so pitifully low that Maranello doesn't see it as worth mentioning.