Joined Apr 14, 2010
·
86 Posts
Sorry for the delay in posting, it seems that I lost a couple days in Vegas. To those of you who emailed me to make sure I am still alive, yes, yes I am. Not only am I alive, but I made it out of Vegas and all the way to San Diego with no tickets, no arrests, nothing...at least, nothing that I remember... Picking up back where I left off, after a day full of great hikes in Zion, my mother and I woke up the next morning in a full on snow storm, which made me a little nervous because my car had never seen snow and there was no swapping out those high performance tires in Zion. After spending the morning waiting for the snow to stop and melt off the roads, we finally made our way to the airport in Vegas, where I put my mother on a plane home.

As we got near the airport, she started getting nervous about whether she was ever going to see me again (I told her about Marfa and about breaking 140 5 times between Austin and Marathon) and started racking her brain for advice she should give me before we parted ways. Just as she was launching into some general advice about watching my back in Vegas (I'd never been before), two tricked out hondas that were clearly racing each other went rocketing around us at about 120, which inspired her to share the following insight: "See, that's what I'm talking about. The thing you need to understand about Vegas is that everyone thinks they're a big winner..." dramatic pause "the secret is..." dramatic pause "they're not." Can't say whether this insight was helpful or not as I don't remember much about my time in Vegas, but I promise that I will try to piece together the little slivers of memories I do have in my book. Way too exhausted to attempt it now.

I got to San Diego late last night, on a pilgrimage of sorts because this is where I fell in love with Porsches. I came here for a week about a year and a half ago to put myself back together after a closet case that I had fallen really hard for crushed my heart. Nothing helps me heal like being alone with the ocean. So, I flew out here in the middle of October and got a little room with a balcony looking over Pacific Beach and, with the exception of my morning drives, did nothing but run on the beach, surf, drink and listen to music all day and all night.

In an attempt to cheer myself up, I rented a Boxster S that week (having always appreciated Porsches for their sheer sex appeal, but never having actually driven one). Being as emotionally spent and numb as I was at the time, I got completely hooked on the emotional response I got from driving it and started every day just driving for a couple hours with my coffee. When I got home, I couldn't stop thinking about how good it felt to drive that car. I would be sitting at my desk, drafting a really complicated merger agreement late at night and suddenly some memory of being in that car and how amazing it felt in my hands would flash through my brain (like memories of making love to a woman you are completely in love with flash through your brain for days, weeks, months after that particular night you can't get out of your mind is over). I would have to shake it off and force myself to refocus on what I was supposed to be doing, but after months of these memories relentlessly flashing through my brain, I finally gave in.

It seemed like a lot of money, but I did some quick math and realized it was less expensive than 3 years of dating women. So, I swore off women and ordered my custom Cayman S. If there was one thing I knew for sure, it was that this car would never, ever disappoint me, and it never has. Over the course of this trip, it has given me some reason to fall in love with it all over again about once a week. Find me the woman who measures up to my car, from the sex appeal to the fun to the integrity (still in awe that it drives fine after bottoming out so violently at the speed I did) and I will marry her...in a year and a half when the ban has expired. 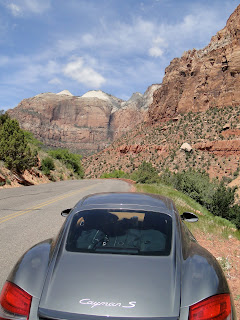 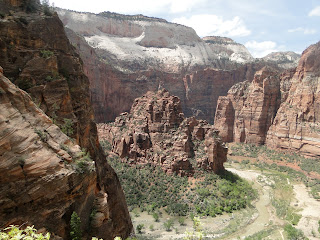 The "big bend" in the Virgin River from Hidden Canyon Trail 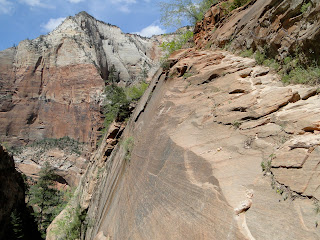 I would not recommend Hidden Canyon Trail to anyone who is afraid of heights, unless, of course, you have a burning desire to see that person sob like a baby... 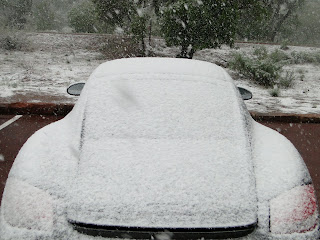 Someone definitely lost her snow virginity, but I'm not going to mention any names. 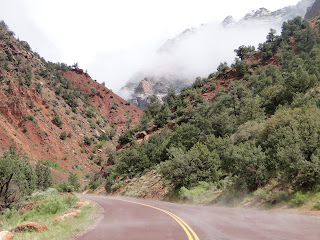 I'm not going to tell you how much I spent on dry ice to create this photo op, but it was a lot. 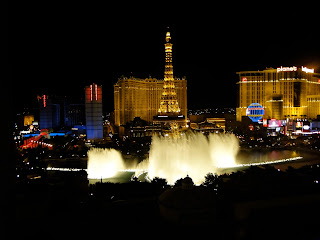 http://3.bp.blogspot.com/_AZkSAr5dfaA/S-4LmBLyUEI/AAAAAAAAAKY/Zpraq6RIPJI/s1600/DSC01465.JPGFound this (only Vegas pic) on my camera...not sure who took it or when, but it would seem to indicate that I did not totally imagine my time in Vegas, as my camera was there for at least one night.​

Joined Apr 15, 2010
·
724 Posts
Funny I never seem to recollect any of the times I have been to Vegas either. I will be there again mid June and once again I doubt I will remember much let alone have any pictures.
1 - 2 of 2 Posts